Sports and Leisure at the Anderson School 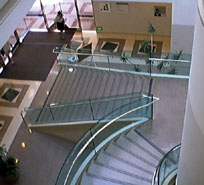 Robert and the other Anderson School graduate students enjoy well-appointed offices, new computers, excellent options for on-campus lunches, and attractive buildings and grounds. However, they are not always sitting in their offices working--sometimes they take time off for athletics, the leisure activity of choice when you want both to stay in shape and to compete 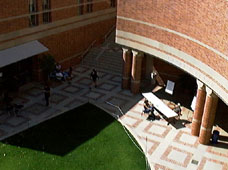 frantically with your fellow scholars.

Hence, we bring you the first installment of the Finance Area Sports Column. In today's column, we will first provide a brief survey of the various athletic events the students participate in on a regular basis, and then we will provide in-depth coverage of a single sporting event (also known as The Big Game).

The students enjoy both participatory and spectator sports in this balmy Los Angeles weather: a SuperBowl party was attempted, but remained poorly attended; pick-up games of tennis and squash at the John Wooden Center are common on weekdays; several enthusiastic students went to a Red Sox-Angels game in Anaheim; a party of six went mini-golfing at an excellent, if expensive, mini golf course in Carson off the 405; and, after Augusto's tip about the nearby bowling alley, another group of students went bowling one summer Wednesday night.

Though Ashley was scared off by what she anticipated as the other players' high level of skills, Martin, Amit, Augusto and Orietta, and Robert and Christina went nonetheless. Martin had never bowled tenpin before, and kept asking whether the only point of the game was really to knock over all the pins (yes). Amit had never bowled before at all, but very quickly became the champion, beating Augusto and Robert--the first match's high-scorers--in the second match. Below are pictures of the bowling forms of several players: from left to right, Augusto places the ball in the center of the lane for a perfect shot; Christina unintentionally puts too much spin on the ball; Martin looks like a much better bowler than he actually is; and Robert practices the strange little bowler-hop of a follow-through. It was an exciting night--but, after all, it was nothing compared with The Big Game of a few weeks later. . . 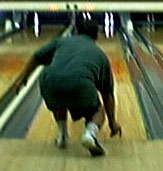 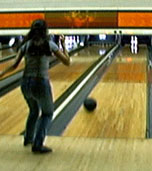 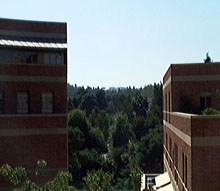 Editor's note: we apologize for the lack of photographs for this column; our photographer was otherwise engaged.
September 4, 1999. Saturday. 11 (ish) A.M. The day is clear and cool. A single spectator sits on the grass, watching eagerly as the second finance department American football touch game begins.

At the previous game, zero spectators and five players (two of whom had actually played football before) were in attendence. Highlights of that long-ago first game include Amit's awesome barefoot speed on the field--followed by three days of sore leg muscles, and Martin's interpretation of the term "touch" football, which resulted in Robert's torn shirt. The score from that game is unfortunately unavailable at this time.

Today, however, twelve players take to the field--armed with one game's worth of experience, everyone from the first game returns except for Bing (perhaps he was scared off by Martin's terror-tactics). This time, there are three powerhouse Americans to divide between the two teams: two New Yorkers (Robert and his high school friend Ben), whose agility was no match for their opponent, and a former frat guy from somewhere in the midwest with near-Hoosier-like skill (that would be Dave). In addition, former players and financiers Amit, Martin, and Shu are joined by marketers Path and Andres, Sahn-Wook and the new first-year guy from BizEcon, and financiers Justin and Shingo--spouse of the lone spectator.

Tension is high, and the field is slippery from the early-morning sprinklers. The third- and fifth-years were on one team, led firmly by Dave Wessels, alpha male and star quarterback. On the opposing team are arrayed the second- and fourth-years, who opted for a more democratic approach to their team-play, with the position of quarterback alternately held by three of the players in turn.

In the first half, defense is high, with almost no first downs in the first fifteen minutes of game time. But then, Dave's team falls into its groove; Amit (barefoot once more) catches a pass, outrunning all defenders for a touchdown. After the game is relocated to a smaller field to accomodate the intermittent sprinkers, several touchdowns follow in rapid succession. Before the excited players know it, 12:30 arrives, and Ben and Shu have to leave, providing an excuse for a 7-Up break for all. Now, at halftime, it becomes obvious that the teams must be reorganized: Path and Andres are swapped for the BizEconers, and the game continues.

Now, that previously under-utilized talent, Andres--no longer in the shadow of Shingo and Amit--brings his rugby skills to help to the struggling second-year team: rugby skills that bring many remarkable drives and even more remarkable backward laterals into nowhere (=numerous backward fumbles). Ultimately, strategy proves futile for the players, with even the most cleverly choreographed plays degenerating into Brownian motion.

With not a single touchdown scored by the second-years, the end of the game is at last signalled by the sudden blast of a sprinkler directly onto Dave, as he stands, poised to make a final pass, in the middle of the field (not too surprisingly, that play remains incomplete). By the end, invigorated by his cheering section, Shingo has bested battle-weary Amit for the title of MVP. Setting aside memories of the illegal blocks, pass interference, and many truly bizarre throws from soon-to-be-downed players, the two muddy teams depart with good feelings and brownies for the road.

Now, the question is--will there be a third game?

Check out our updated coverage of Anderson sporting events!