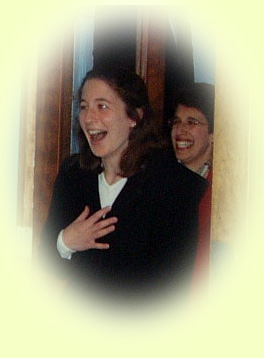 Everyone knows that Maria and Bentley are getting married in May 2001, and most of their family and friends will try to make it to Sleepy Hollow, New York to be with them on their special day this Memorial Day weekend. However, Maria's bridal shower took place in New Jersey this March, and some people were unable to be there--some, because they are far away; others, because they are male. Either way, this page is for them to look at now, and for Maria and Bentley to look back on later.

The bridal shower was jointly planned by Maria's Matron of Honor, her cousin Christina, and her far-flung bridesmaids, high school friends Meghan, Deanne, Adele, and summer-program-friend Hannah (who, way out in Vancouver, wasn't able to make it to the east coast for the event), predominantly by email (look below for a sampler). Maria's mom and dad provided input in the form of a suggested guest list and help on Maria's food preferences.

All of the pictures on these pages except the two below were taken on the day of the shower or the day immediately before it: the two family group shots below were taken about a month apart in 2000 and are provided here for reference for those in other states who may not have met all of Maria's or Bentley's relatives: first, Maria and Bentley pose for a group shot with Maria's family, including (back row) her Grandma Grace, Aunt Connie, Uncle Harry, Aunt Mary, and (front row) mom Carla and dad Steve; and second, at their engagement party in March of 2000, Maria and Bentley pose with Bentley's family, including (back row) his dad Rocky, older brother Rudd, and (front row) mom Cookie and younger brother Andrew 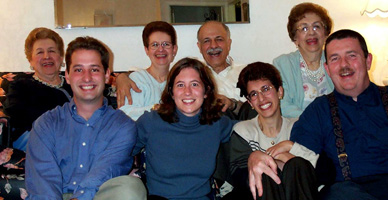 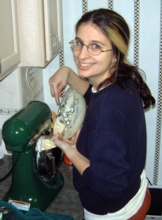 The shower was held in the fellowship hall of Meghan's church, one town over from Maria's hometown of Berganfield, New Jersey. Deanne, Meghan, and Adele went over to the church the day before to set up tables and chairs, and Christina, Grandma, Aunt Mary, and Aunt Connie and Uncle Harry arrived around 11am on the day of the shower to finish decorating and setting up. Guests started arriving around noon, and Maria made her grand entrance at 1:30--apparently genuinely surprised, judging from the look on her face (she thought she was attending a coffee hour and memorial service at the church, and arrived with her mother, father, and Bentley). Meghan greeted them at the door and led them downstairs, where everyone was gathered. "What's all this?" Maria asked, and as she entered the large hall, her Grandma Grace rushed forward to get the first hug. 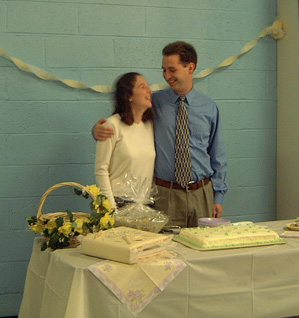 Once Maria and Bentley posed for a few pictures together (at left), Bentley, Maria's father Steve, and Maria's Uncle Harry and Uncle Ed left together to go have a men's lunch at Charlie Brown (sitting in the bar so they could better watch the big game) and the women got down to the business of the bridal shower: food and presents, of course!

The shower lunch consisted of cheese and crackers, veggies, chips, pretzels, and a hot spinach-artichoke dip, put together by Meghan, Deanne, and Adele with the help of Meghan's sister; a large platter of cold-cut sandwiches on deli rolls, a platter of small finger sandwiches, a platter of vegetarian wraps, cole slaw, fresh fruit, and an antipasto-flavored pasta salad, catered courtesy of Grandma Grace and Aunt Mary. For dessert there was a honey-wheat carrot cake with white chocolate cream cheese frosting, apricot-poppy seed cookies, pecan capuccino shortbread cookies, and lemon-frosted butter cookies, all made by Maria's cousin Christina (pictured). 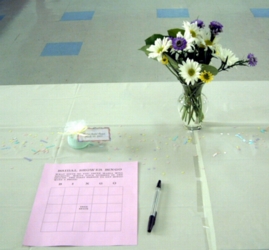 After lunch, Maria took her seat in the bridal chair on the stage and proceeded to open her gifts. Meghan handed her a package; Maria announced whom it was from and opened it; Christina recorded the gift and the giver for Maria's thank-you-notes; Deanne repacked the gift for taking home; and Adele rescued all of the ribbons to form into a bouquet for Maria to carry at her wedding rehearsal. Deanne set a timer to go off at intervals during the opening of the gifts, and whichever guest had her present on Maria's lap when the timer went off won a small prize. There was also a game of bridal shower Bingo (pictured), in which guests tried to guess which gifts Maria would receive, and whoever got five items in a row first won another prize.

Though she may have just been being tactful, Maria said that everything about the day was wonderful and that the shower was truly a perfect part of her dream wedding. She still has a few months to go before the final part of her dream wedding, however, and in that time, she and Bentley have to figure out some way to get all of their shower presents down to North Carolina!

The next two pages contain thumbnails with descriptive captions. You can click on a thumbnail to go to a full-size image, but be warned that the individual images may take a little while to load on slower connections and may not display entirely in your browser window, depending on the resolution of your monitor and the size of the window. You can always download the images to your disk to view off-line or to save, but the reason I've left the images at such high resolution is so they are suitable for having made into 4x6 or 5x7 prints from any of the online photo-processing places (read mini-reviews of the different sites here).