1) going to the first Apple Store to open in New England, the Northshore store in Peabody;

3) celebrating Labor Day and the end of summer by grilling lobsters on our deck.

in between, we also did some of the following:

a) admired the Boston skyline, September sky, and Charles River;

b) admired the traffic we got to sit in and admire the skyline, etc., from. 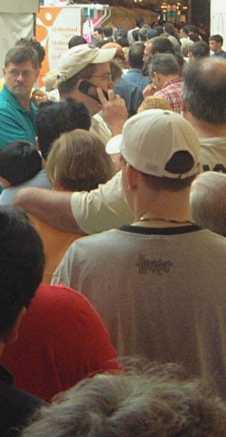 We were both very excited about the Apple Store opening, although I was slightly more excited than Robert--even given his recent warming-up to Macs, also narrated on these pages--and tried to make us leave the house at 8:30 in the morning to get to the store by 9. I anticipated there being such a long line of people waiting to get in that we wouldn't set foot in the store till 10:30, even then. Well, Robert called me crazy, and asked how many people would actually be there that early in the morning, but when we arrived at the Northshore Mall in Peabody a little late, at 9:15, he was stunned to find a very long line of people. Apple was giving away free tee-shirts to the first 1,000 or so people, but it was the whole idea of an Apple Store--a piece of Cupertino right in our own backyards, giving us all a chance to hug the Macs up close, to play with iDVD, to sit at the sleek Genius Bar--that drew the crowds, much more so than the free tee-shirts. We were about the 600th or 700th people on line, and we did indeed wait an hour and a half before we were able to get to the store. By the time we got in, a good hour after the store and the rest of the mall would normally open, there were another 600-700 people on line behind us. At right is a glimpse of the line ahead of us, taken with the camera held above Robert's head. 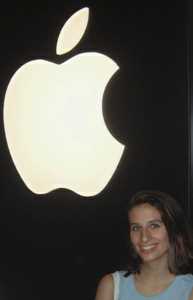 The store was even more beautiful than the other Apple Stores appeared in the photos and videos on Apple's webpage--minimalist, modern, and gleaming, with the friendliest staff I've ever seen, each with a cool black Apple Store tee-shirt we on line all coveted (our free tee-shirts were similar, but white), and a slick business-card-holder on a cord around their neck. The people on line with us covered the whole spectrum of Apple users, from geeky power users who could clearly converse on nothing other than computers to enthusiastic but relatively newbie middle-aged folk/families, with a fair proportion of young couples out for a pre-breakfast jaunt on Labor Day weekend. When I pulled my iBook, Crystal, out of my pocketbook on line, people gasped and clustered around me--and she's almost 5 months old! When I could actually detect the "Apple Store" Airport network with Crystal, we knew we were getting close; I quickly made a new location for her, connected to the network, and the group of us were soon surfing Mac websites while we waited. Meanwhile, staff came around to talk to us on line, alternately wheeling iMac-boxes-ful of bottled water and showing off TiBooks, offering us the almost unheard-of opportunity in retail stores to hold the 'books, free of any cables or chains or security devices. It was Mac heaven--at left, I stand in front of the glowing Apple sign right next to the main entry to the store, after a successful wait. 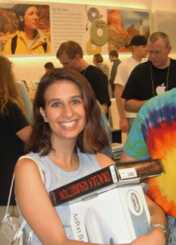 browsed and poked around, found a few tech questions to ask, discussed our 1.5-year-old free MP3 player (the Nomad II/eMusic deal) with a staff member who also got one in the same deal, gawked at the theater, loved the children's corner with its carpet and squooshy chairs, found one game to buy, and drooled over the Airport-flying-saucers. We were about to buy one, to bring home and connect to Worf and Crystal (in fact, here I am clutching one in my arms at the cash register), but there was an unfortunate credit card screw-up affecting everyone in the store, so we sadly put the Airport back to wait for another day (actually, till tomorrow--we came back with Robert's Grandma Helena, who loved the store and gave many a "oh what a wonderful world we live in, you children are so lucky to have things like this" comment, got more tee-shirts--they apparently had quite a few more than the 1,000 advertised--said hi to the eMusic guy, and bought the Airport).

On our way out, we noted the high-quality of the Apple bags--lovely, blue plastic drawstrings; got excited about the free Apple blank books they gave you simply for making any purchase on opening day; grabbed our beautiful tee-shirts (I changed into mine in the car on the way home); and tried not to scare the non-Apple-Store-mallgoers as we loped toward our car, happy.

2) we weren't quite as happy an hour later, as we still sat in our car, attempting to get to Annie's old place to help her move to the new place, stuck in traffic. Today was a champion day for traffic: first of all, it was Moving Day, September 1, when a majority of the rental apartments in Boston change hands--students around town are switching apartments and roommates and stuff, piled out by the curbs, like mad, and if you don't reserve your U-Haul way in advance, you will never get one for this day. Bizarrely, not many people think to beat the rush and move on August 31, or September 2, so everyone ends up stuck in an endless line of moving vans, pick-ups with furniture, cars with mattresses strapped on top, and minivans crammed with stuff, all trying to go where the other vans just came from. This happens every year, of course, but was worse this year because September 1 fell on a Saturday. Plus, there was a sold-out Red Sox-Yankees game at Fenway, which did not help the midday traffic scene. And, it being Labor Day weekend, you also had the swarms of freshmen (who normally don't enter into the September 1 moving fray, since they tend to live in dorms and do the orientation thing and arrive in minivans crammed with stuff and parents), arriving and orienting and moving into dorms with their stuff and minivans and parents, all ready to start classes after Labor Day--altogether, this was some pretty amazing traffic. Here's a view of the traffic, stretching as far as we could see toward Allston-Brighton (heights of studentville), flanked by two views of Boston also taken from our car as we sat stuck in traffic, slightly before we got to Allston.

Boston was looking exceptionally pretty, despite all the moving and traffic, and at left you can see the new bridge, fully completed but not yet in use, because the roads that will connect to it on either side aren't yet complete, with two blimps for the Red Sox game. At right, you see the Charles River with MIT buildings peeking behind the trees, and a sailboat--the sky was blue, the water was bluer, and until we got very close to Annie's house, we had more to look at than just other cars and vans. 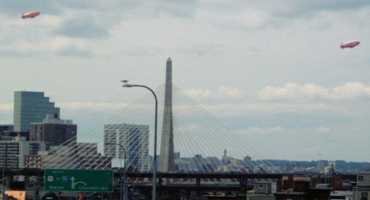 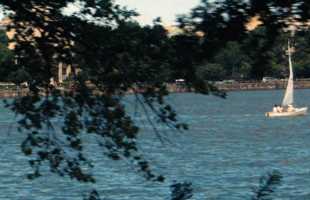 After we moved Annie--just two carfuls of stuff, the neatest-packed, easiest to hold (all with nice twine handles) stuff we've ever helped anyone move--we had a late lunch at the Pizzeria Uno's at the corner of Harvard and Comm, all the time looking at moving vans outside the windows. In one brief 1-mile trip, going from her new place back to her old place for the second load of stuff, Robert and I counted 110 moving vans--a staggering number! Keep in mind that this was just professional movers or commercial rented trucks/vans, like Budget or U-Haul or Ryder, and didn't count the other vehicles on the road, like ours, that were pressed into service for the day. 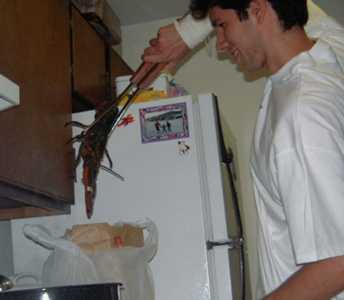 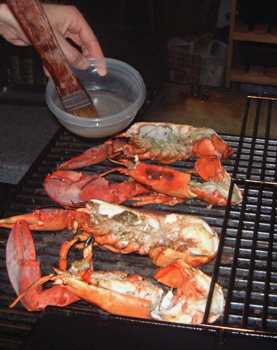 3) While we were in the area, we dropped by the Allston Star Market, once a flagship store teeming with free samples and wise fishmongers, new in 1994, now a deteriorating Shaw's, but still a decent all-around supermarket, to buy some general groceries, but, in particular, a pair of $5.99/lb live lobsters (nicknamed Charlie and Fred by me, while Robert tried to pretend I hadn't just named his dinner). The lobsters sat happily--or not so happily--in a paper bag inside a plastic one, top tied for the drive home, then opened in the fridge till dinner, so they could breathe.

At left is Robert lifting Charlie from their bags into a pot of boiling water; we boiled them just 2 minutes to kill them and par-cook them, then we (okay okay--I mean Robert. I sat and watched) split them down the middle, making sure to capture all the juice that ran out of them, and laid them on a hot grill--5 minutes on their backs to firm the meat up, 5 minutes on their stomachs to cook through, then briefly on their backs again, salted and basted with their own juice. We ate our Labor Day barbeque out on our deck, with corn on the cob and an IBC root beer and garlic butter and lots of napkins--the lobsters were tender, juicy, not overcooked, and very good, with a great smoky flavor--a wonderful end to the day.