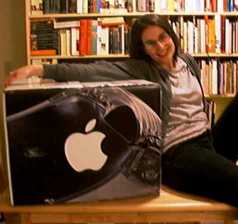 A New Generation: The Arrival of Worf

You may have read elsewhere about the adventures of my trusty Powermac 5400/120, Darwin. Now, at three and a half (people years), Darwin was aging. Still a faithful computer, he took to protesting when his users attempted to do simple tasks like open the TCP/IP control panel or unstuff a file or send a large attachment; oh, he would comply, all right, but slowly. . . .

Robert has been becoming more Mac-friendly since the week he met me, though not particularly more Mac-literate; at the least extension conflict he returns to the, "You're the Mac expert. . . " call, leaving me to troubleshoot the problem. Problems do arise, of course, with a Mac as with any computer of any kind, super, desktop, or palmtop (don't ask Robert here about how many times he's crashed his Pilot installing unstable third-party apps. . . ), but I contend that problems on the Mac are more easily solved than on a PC. Somehow, though, Robert is a PC man at heart; if from the kitchen I call, "Well, just check the Appletalk settings and then zap the PRAM," I am usually met with silence until I go into the study to check. I then find Robert pawing around in the system folder, or sometimes resorting to Sherlock, just to find a control panel! Laughable, my Mac-user friends would say. . . just laughable. Still, though he may not be a Mac-user through and through, Robert has become very fond of Darwin in specific and Macs in general; the two of us separately peruse dealmac.com, dealchat.com/mac, macfixit.com, versiontracker.com, and macintouch.com often, and he always has a hankering to buy dual-platform or Mac-only games (most of which sit idly by while he works on his finance papers, but Darwin and I do appreciate the sentiment). So, we decided to take the plunge. . .

We decided to buy a new G4. The new G4/AGPs had just been introduced at Macworld Tokyo; it was February of 2000, and the time was right for buying a new Mac. We spent a week reading everything we could about the new models, and avidly comparing prices on the net. Then, we ordered our G4/400, the base model, with the 10gig ATA drive and 64 mb of RAM. Separately, we ordered 2 128mb dimms for the new machine, and when they arrived switched the 64mb dimm out for Robert's PC to use. Even before we brought him home, I had decided what our new G4 would be named: Worf, because he would be big and strong and wear grey battle gear. 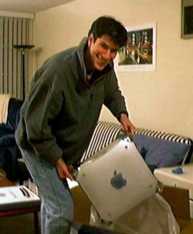 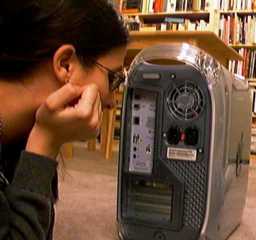 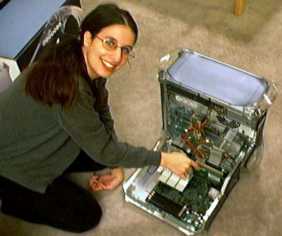 Worf arrived at my office, a pretty safe place to have large packages delivered, at 11am on Tuesday, 2/29. I got someone to help me move him out to the car, and then panicked the rest of the day because I couldn't remember if I'd locked the car door or not. He made it through the day peacefully, though, and that night Robert and I unpacked him before going over to Brigitta's birthday-party; like Brigitta, our Worf too is a leapling. Above are some pictures taken the night we brought him home. 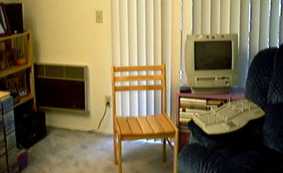 Before Worf arrived, I made sure to have a long talk with Darwin and to explain that there would still be need of him in our family of computers, and a port available on our switched hub as long as he wanted it. Pictured here in his new home, sDarwin moved into the living room, to serve three primary functions: he is our mp3 jukebox, hooked up to our tuner and stereo speakers, and playing songs from our digitized CD collection; he acts a file server and primary backup for Worf's applications and files; and he provides web access to an entire room of our apartment which had previously been lacking in this respect. With the 88-mb RAM, OS 9 Darwin in the living room, I never have to stoop to inserting an audio CD in the stereo CD player, nor does Robert, if sitting comfortably studying in our big blue chair, have to walk all the way into the study to find out what the weather is (yes, he really does use the web to check the local weather--I too thought it was bizarre at first, but not anymore). For now, Darwin also hosts our Microtech USB card reader 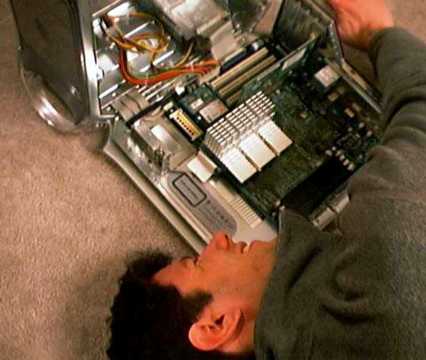 (for downloading digital pictures from our camera) and our Visor cradle (for USB hotsync of our data), as there are specific conflicts between these devices and OS 9.02, which shipped on Worf; these problems should be corrected soon, with new drivers and/or 9.04, and then we will wean Darwin away from the last of his peripherals and switch them to Worf, since his USB hub is rather empty now, only hosting a scanner.

Meanwhile, in the study, Worf is a blazingly fast computer. Opening a control panel, opening Word 98, opening Netscape, downloading and decoding anything--all are significantly faster with Worf then they were with Darwin. Not only is he fast, but as the photos show, Worf is truly an elegantly-designed machine, with a practical internal design that allows for effortless swapping of cards and chips. Compare him to his nearest "competition"--the inside of a modern PC--in this case, Robert's home-made box.

On top of everything else, Worf also has two ethernet cards, his built-in and an AsanteFast 10/100, and a software firewall, so that he can better route traffic to and from the internet and our local network. This means, of course, that our hub is filling up: with Worf, Darwin, Robert's PC (not so affectionately nicknamed "Crashy"), and our dual-platform Snap! fileserver (to store movies, mp3s, and anything else we might want to access from either a Mac or a PC), we only have room for a networked laser printer before we have to consider a new switch or hub. Worf is still a young computer, and there is lots of time for him to grow; we still have lots of software to install, lots of peripherals to add, and two PCI slots begging to be filled up. Throughout it all, however, we won't forget Darwin--I think I hear him playing a tune now. . . .