OUR FIRST ANNIVERSARY or, a week of endless celebration. 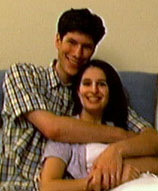 Our first wedding anniversary was on Sunday, June 20th, 1999. Robert had just finished up two weeks of final exams on Friday, and was due to take a four-hour comprehensive exam in microeconomics on Monday the 21st, so our main celebration was slightly postponed. He studied all 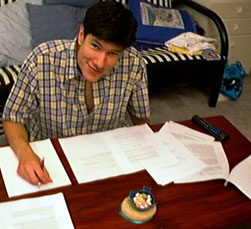 day Saturday while I was at work, and when I came home we went out to dinner at Cowboy Sushi, one of our favorite all-you-can-eat sushi places (it has very high quality fish, and it's not buffet-style--you sit at the sushi bar and order what you want). After dinner Robert bought me some blue and yellow flowers, and then we separated for a few hours to wrap and put the finishing touches on each other's present--or, in certain people's cases, to immediately run out and buy them. 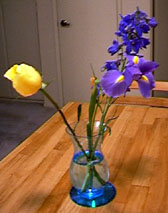 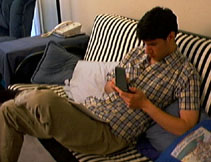 At midnight we opened our presents: I gave Robert a Palm Pilot IIIx, already configured with all of our appointments, addresses, and memos (and of course, complete with a list of To-Do's) as well as half-full of games I thought he might like. Robert gave me a Memorex 13" TV/VCR combo--this is actually much more romantic than it might at first sound, since I had an old similar model Memorex from when I lived in Berkeley. My old Memorex was a lovely, reliable little machine with particularly nice programming features and an excellent pause feature, but when we moved it from Berkeley to Los Angeles, it fell off a box and was never again able to output any sound. It was usable when connected to an external speaker, but this meant that the remote control was useless for the volume control--and at night, when the dishwasher would be going in the other room, I was the one who had to get out of bed to adjust the volume. 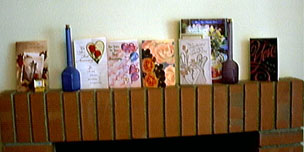 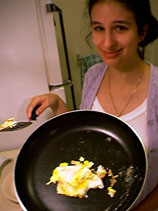 little computer-clock from cousins Rie and Steve, a lovely picnic basket packed with table settings for four from Aunts Mary and Grace, and from Mom and Dad in New York, two blue glass champagne flutes and a coupon for a Deluxe Maine Clambake Lobstergram.

On Sunday, I was up early to make Robert one of his favorite breakfasts of fried egg sandwiches. I toasted the English muffins, then melted cheese on them, and set out the Tabasco sauce and pepper. I'm not, however, all that good at flipping the eggs--although I tried hard.

Robert studied most of the day, with breaks for lunch and dinner. For lunch I made a platter of spicy tuna hand-rolls (temaki) and some udon noodles with a nice gingery shiitake mushroom sauce (courtesy of Trader Joe's--I highly recommend it) and scallions. 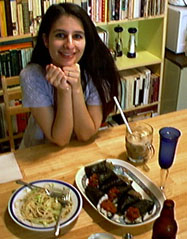 Dinner was a French boef a la mode--apparently Julia Childese for a pot roast--cooked in red wine with carrots and onions, and steamed parsley potatoes and a green salad on the side. 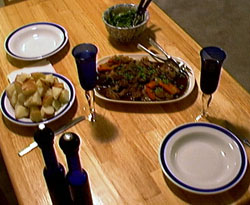 The next day was the comp, which seemed to go very well, and after it I met Robert at school and we continued our celebration with a lobster taco and burrito at Rubio's on campus. But wait! Our festivities were not yet over, for Tuesday night when I came home from work I brought with me a copy of Firsts Magazine, a book collector's magazine which just published a long article on Victorian women novelists which I co-authored. 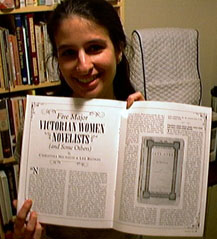 We went out to dinner to Chaya Venice to celebrate the article, and ate a truly wonderful selection of unusual appetizers (including yellowtail sashimi salad, tuna tartare, tuna spring rolls, battered soft-shelled crab, and Dungeness crab cakes), plus a nice pan-seared tuna, a delicious lobster ravioli, and a raspberry chocolate napoleon dessert.

On to the clambake...