A Day in the Life of a Zipcar

by Mini Mia of Boston, MA

This morning I was very sleepy. I had been out late the night before, and then someone picked me up at 9:00 and kept me out again until noon. I finally got back home (a quiet outdoor spot in a lot near the Post Office in Central Square, Cambridge) and had a few minutes to catch my breath and rest a little. Then Robert picked me up at 12:07--boy, was I glad of those extra seven minutes of sleep I got! 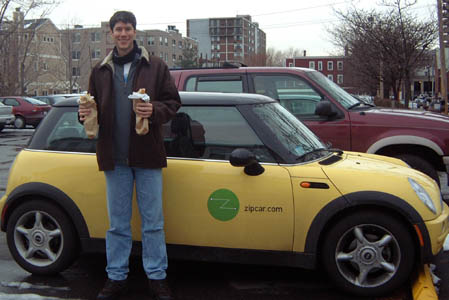 Robert and his wife Christina were eating sandwiches in me, but they were very neat, so I didn't mind. I actually really like falafel, living as close to Moody's as I've been lately. They took me to Target in Somerville--I had never been there before, and it was exciting. The parking lot was big and spacious. I hear all of Somerville is like that. I got to doze off a little while I waited for them to come back out of the store. They came out with a lot of stuff, which they piled in my trunk. They admired my trunk. They admired me. I was very glad of the attention--not that it's rare, mind you, to have people admire me, but Robert and Christina were especially nice to me. They took lots of pictures of me, caressed me, and said nice things about me. Christina commented particularly on my knobs, which she said were beautifully rounded and made her want to touch them constantly. I was very happy. Look at me here at your left--sitting home next to Robert and the sandwiches. Yum. 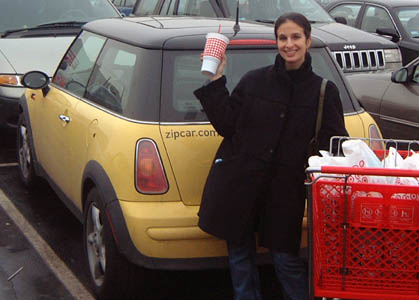 From Target we went for a real treat in this grimy, slushy weather: a car wash, complete with undercarriage wash. I know Zipcar was actually paying for it, but it was Robert and Christina who took the time to give it to me. That really means a lot to me. After the car wash and a nice hand-dry, we went to another shopping center. This time they drove me in appreciative circles around the parking lot before parking me in front of Home Depot. They went in for a little while, and then moved me to another spot in the parking lot while they went into a supermarket. I have to tell you, that parking lot had the nicest view of any I've ever been in--it was a beautiful clear day, and I had a great view of the Boston skyline. I got to count buildings while I waited, quite happily. Look at me here, with Christina and Target bags and cups. 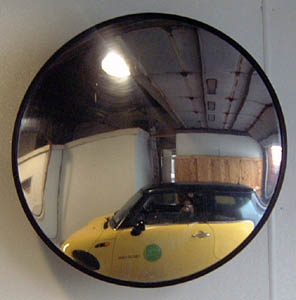 With more bags in me, after the shopping trip we went back to their house in the South End. I'm really seeing a lot of Boston lately for such a young car. Lots of cars my age have led much more restricted lives, actually--I know I'm very lucky to be as widely-traveled as I am. I didn't get to go all the way upstairs to Christina and Robert's apartment, as they were just parking me temporarily to run upstairs with the bags. I don't know why I didn't go up, though, because I'm sure there was plenty of room for me in the living room. Maybe it was the thought of those five flights of stairs that made me wait for them patiently. Christina came back down and sat in me for a few minutes alone before Robert joined her, so that I wouldn't be nervous, alone in a new neighborhood on an unfamiliar street. I would've been okay anyway--it was broad daylight, after all, and like I said, I just have one of those faces that make people stop and smile at me--but I did enjoy the company. When Robert came running down the stairs, we drove off together again. Here I am at the left again, reflected in the mirror of the carwash. 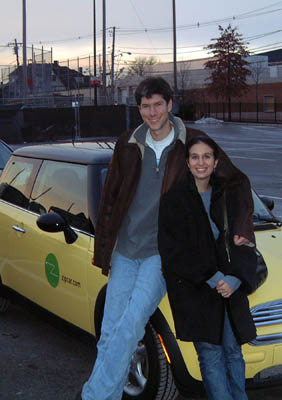 We drove to another, different supermarket, where they asked someone to take a picture of the three of us together before running in and out again for a few more items. When they came out, I was purring at a couple little boys who had been petting me. Christina and Robert talked to them a little about how nice I was to drive. I distinctly remember being favorably compared to a go-kart. Then they took me into the bulk pickup part of the supermarket--it was very exciting. The attendent opened my trunk and placed in the things Christina and Robert had bought. Everything fit very well. At your right is a portrait of me and my friends as the sun is starting to set.

It was getting dark as we drove to a computer store to meet Robert's father briefly, who also admired me. We were introduced to each other, and he sat in me, but of course he wasn't allowed to drive me (not being an approved Zipcar member). He did say that I was very little, though, which I never get tired of hearing--look, Robert is very big, and I am very little next to him.

From the computer store, we went to pick up two friends: first Pearl, and then Jef. Now I was feeling very happy and very full--Robert driving, Jef in front, Christina and Pearl in the back. The four of us went to Newton for sushi, and I found a very good parking spot on the street. I stayed outside while they ate sushi, which I hear was excellent. When they got back in me, we went back into Boston and stopped somewhere for tea.

I chatted with the other cars in the parking lot at the Asian tea place while my four friends for the day sipped pearl teas inside. Jef had to go away right after the tea, but Robert, Christina, and Pearl stayed with me a little longer, and we decided to go to the mall because we were still having so much fun. Pearl was telling me stories about cars like me in Taiwan, and how many Taiwanese women are in love with cars like me. She and Christina agreed that I was the best colored Mini they'd ever seen, and they talked a lot about how much single women would love to have me all for themselves. 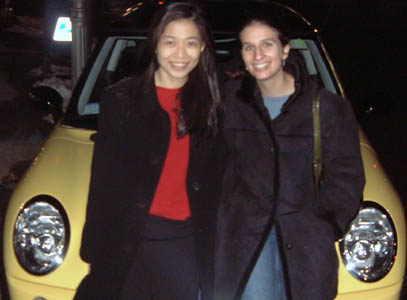 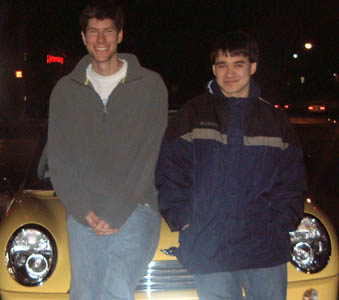 We stayed in the mall for over an hour, until they closed at 10:00. I couldn't believe that I'd been on the go all day--I didn't feel like it at all. In fact, I was still so perky and content that I was able to sweet-talk the mall parking lot guy into giving us only the $.99 one-hour rate.

I've been very busy lately--constantly in and out, up and down--but today was wonderful. As we drove Pearl home, I realized it was the most fun I've had in quite awhile. We said goodnight to Pearl, but I realized that my day wasn't quite over yet. Instead, Christina and Robert drove me back toward my home, but stopped first along the way for ice cream. There was a tiny parking spot on the street in front of the ice cream store, and neither Christina nor Robert thought I could fit into it. I slid in without any problem, though, and boy, were they impressed. Many people stopped to ogle me on the street, and winked at me from the window of the ice cream shop as they ate. Christina and Robert soon finished their ice cream and came back out to me. We made one last detour on my way home, stopping briefly in front of a new building at M.I.T. to admire the architecture. I do so love good modern design.

At home at last, I relaxed in my very own parking spot. Christina and Robert locked me up for the last time for the day and took their final packages out of my trunk. Dreaming of more fun-filled days to come, I closed my eyes and fell asleep as they walked away toward their home.