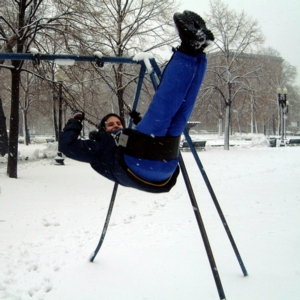 HOW much hype is too much hype? On Saturday afternoon, March 3rd, we started hearing about a sudden two-day storm coming our way--supposedly a perfect storm, a giant northeaster, a combination of systems, even--according to one report I read, in a nicely mixed metaphor--"a two-act symphony by nature." Run out and stock up, the reports warned--this one will be measured in feet, not inches. It would start Sunday, catching everyone at home, and continue snowing through Monday. We were supposed to meet my former Wellesley roommate, Erika, and her husband Tim for dim sum Sunday morning, and I considered cancelling the night before. We decided to wait and see, however. Always early, I ran over to check on Norman, parked on the street in a nice resident spot two blocks away, in the evening, just to make sure he wasn't on a snow emergency route. He wasn't--he could actually stay in his spot until the first Thursday in April, if we wanted him to (street cleaning would oust him at that point, though). Reassured that he was safe, we were able to eat dinner and retire in peace.

ON Sunday morning, we woke and peered out the window, expecting to see it already starting to snow. Nothing--the sky was cloudy, but that was all. We went to dim sum, and by the time we left Erika and Tim at 1:30, it was still not doing anything outside. We stopped at Foodies (supermarket) on our way home by bus--I picked up some milk and some spinach. The only other food shopping I knew I'd be needing to do at all in the next week (since we were going to New York on Thursday) was some ingredients for the cake for Maria's bridal shower, which I was going to buy and make on Wednesday. I decided not to buy the ingredients for the cake at Foodies, though, because I knew they'd be more expensive there--I'd just go to the Stop and Shop on Tuesday or so.

WE came home, and spent the afternoon running to the window to look for snow. Not even a drop of rain fell, though the winds--which we can really hear whistling past our dining room windows--started to pick up in the mid-afternoon. We can see the barometer on the old Hancock Building from our apartment, and it held steady at blinking red: only sort of not-nice weather, not nearly what it should be (solid red) if it were really about to snow. Toward evening, we got several panicked phone calls from well-intentioned people informing us that there was now a snow emergency, and we should check on our car and move him if necessary--no one seemed to believe me when I said, very honestly, that I was certain he was perfectly fine. Still, there was no snow to be seen. Forecasts were amended, slightly--no longer were they predicting three feet, but they were still saying up to eighteen inches in places, and were also saying that the snow would start after everyone got to work Monday morning, catching them at work, preventing them from getting home easily Monday night, and continuing into Tuesday. 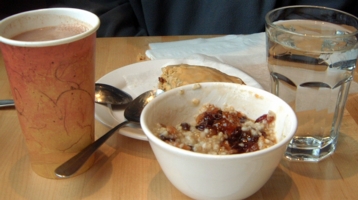 HOWARD and George came over for dinner Sunday night around 8, as we'd planned, to watch the new premiere of the Lone Gunmen series, a spin-off from the X-Files that I at least had had great hopes for. We ate homemade pita chips with a sundried-tomato dip; cauliflower-sauced pasta; a spinach, apple, almond, and blue cheese salad; and a lemon-curd-cream parfait with dried fruit compote poached in port. No one but me really liked the dessert--comments ranged from "too sweet" to "needs a cookie--a cookie, I say!" to "are you trying to keep us regular with this?" (thank you, Howard) to "uh, is there alcohol in this?" (George and his Wisconsin palate), but that was okay. The Lone Gunmen, sad to say, was disappointing--a not bad, kind of well-done, but ultimately formulaic show. George left around 10, but Howard stayed till 11:30, for most of a pathetic, finally abandoned, game of Scrabble. When Howard walked home, it was still not stormy out--still, we had high hopes for a snowday the next day. 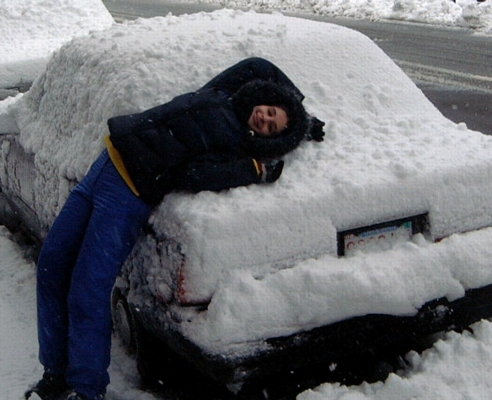 DISAPPOINTED by the weather as well as the TV, we went to bed and woke up on Monday, it was windy but doing nothing else. I made Robert wear a hat for the bus ride into work. It started raining soon after, a nasty, windy, cold rain--or so I'm assuming from the way it looked against the glass. I didn't actually go outside on Monday--it was my spring break from BU. Due to the continued weather reports hyping the snow, many schools and businesses were closed on Monday, and Robert said there were virtually no cars on the roads. By dinnertime, it was still raining, though it looked windier and worse and worse outside. Robert got a ride home with his father, and just after they got in the car, it started to snow a light, wet snow. Ten minutes later, though, it stopped snowing and went back to rain, freezing rain, and the technical term, "wintry mix." So much for our snowstorm, we figured. We ate dinner and watched a (bad: 3000 miles to Graceland) movie, and by the time we went to bed, it was actually snowing again. It had been a snow emergency for over 24 hours by that point, so it was really high time some actual snow did finally fall.

TUESDAY dawned, and for some reason we both woke up quite near dawn--at 7:30, to be exact. We were excited by the snow--there was a respectable four inches already outside, and it was falling steadily. Annoyingly, our DSL connection was down, so we had to get all of our weather information at this point from the TV. Robert woke up his father checking to see if he was going in to work today, and then called the other member of the company (actually speaking to his daughter, since the man was still in bed and not planning on driving in from suburbia) for good measure. We decided to make a snowday of it, so we got dressed in our ski clothes--red pants and matching jacket for Robert, with a hat, even, and blue pants and a blue jacket, with an earwarmer and a hood, for me. Somehow, we always look more disproportionate in size when we catch glimpses of ourselves in windows and mirrors in our ski clothes, as though the colors magnify impressions, and we are suddenly a giant red person next to a tiny blue person. 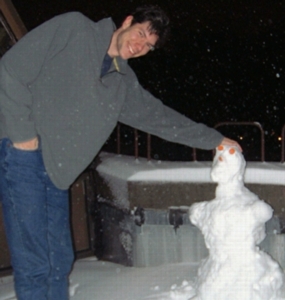 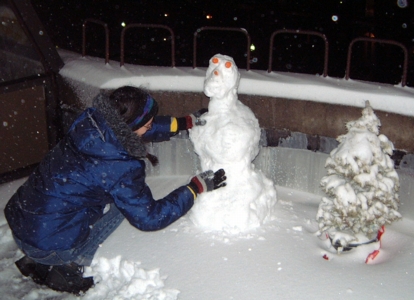 WELL-BUNDLED up, then, we made our way outside, snapping pictures along the way. The plan was to walk to Foodies by way of the Flour Bakery cafe on Washington Street, stopping for breakfast and then giving in and buying the cake ingredients at Foodies so I could actually bake tomorrow. The Flour Bakery was very nice--we'd never been there before, but had always thought it looked good from the outside. We shared a large (almost too large) cup of hot cocoa, a maple-oatmeal glazed scone, and a bowl of brown-sugar oatmeal with a winter fruit compote topping--vindicated, I point out that their fruit compote was virtually identical to mine in looks and taste (albeit mine was swirled in a yogurty-lemon cream and theirs in a bowl of oatmeal). We frolicked in Blackstone Park, making snow angels and rolling down a little slope in the snow, and weren't all that upset when Foodies turned out to be closed. Instead, we walked over to Howard's and threw snowballs against his window. He claims we disturbed his sleep, but strangely, he didn't even answer the buzzer when we buzzed. Needless to say, he didn't get up to play in the snow with us. From Howard's house, we walked back down Shawmut, stopping at the swings on the other side of Blackstone Park. There is almost nothing better than swinging in the snow--it was extremely satisfying. The swings happened to have a completely unobstructed view of the Prudential, though through the fog and clouds we could barely see it. It was very pretty. We detoured a block to check on Norman--he was fine, if a little snowy. We made sure to uncover his resident parking permit, just for good measure. On the way to him, we saw another sleek, if snowbound, car--a beautifully painted Beetle we just had to photograph. 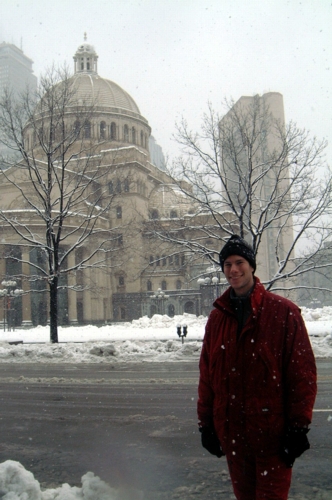 AT this point, we decided to walk on to Symphony to go to Bread and Circus--also more expensive than Stop and Shop, but at this point we were halfway there. Bread and Circus ended up being closed, as well, so although we'd had a lovely walk up to this point, we were somewhat damp and decided to take the bus home, waiting only a few minutes for it opposite the Christian Science Center pavilion.

ONCE home, we ate lunch and watched a (this time really good: Dracula 2000, a clever, well-filmed, philosophical contribution to the vampire genre) movie, talked to George, and then did a little of our respective work. Before dinner, we put on our boots again and ventured out onto our porch to build a snowman. We had different ideas about snowman design, so we came up with this short-armed, masculine specimen, with a very human head I sculpted muself (with carrot features) and little rabbit-like hands and feet. I named him Pete. We had a quiet evening at home, with a late dinner and some ShenMui on our Dreamcast before bed. All in all, we finally had our snowday--two days late, but we were satisfied at last. 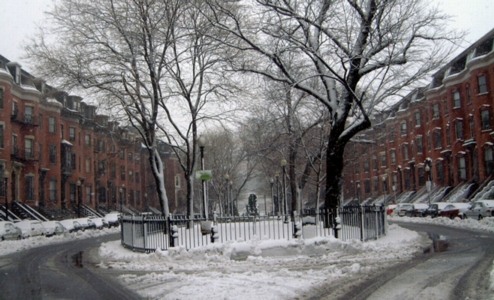