A Weekend Jaunt to San Diego: Koalas and Dolphins and Manatees, Oh My! 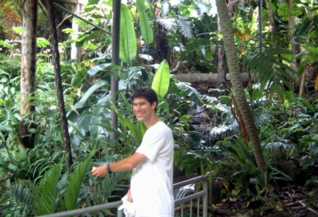 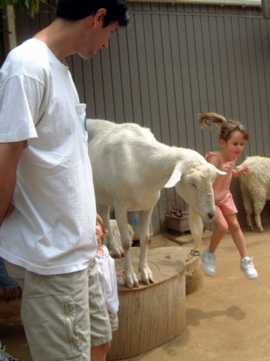 that we've lived in Los Angeles for a month over two years and have never gone to San Diego, not even for the day, we decided not to postpone it any longer, but to leave on a Sunday morning, stay overnight in San Diego, and return to LA on Monday evening. Then, of course, there's the "where will we go while we're there?" question; our main destinations were going to be the zoo one day and Seaworld the next day (hence the catchy sub-title for these pages, as suggested by Robert), and we'd fill in other things as we were able. Supplied with spudnuts for the car, we left LA at nine Sunday morning, and only stopped once on the way down the 405 (and later the 5); shortly after you enter San Diego county, there's a scenic overlook advertised by the side of the road, and a score of cars stopped. We stopped too, and piled out of the car, but we were puzzled what all the tourists were staring at; you were not particularly close to the ocean, and could mostly just see some brown hills sloping down, then the water out beyond, without even any waves or sandy beaches visible. So as not to make the stop a total loss, though, we snapped a picture of a seagull and headed back on the road.

We got to the San Diego Zoo just after 11 am, impressed with how navigable downtown San Diego is by car, and just how close everything--downtown, Seaworld, the airport, the harbor, and the Zoo--are to each other. We used a $3-off coupon for the zoo and purchased the deluxe admission so we could take a short bus tour inside and the sky ride as well. Robert led the way at first, and the first area he led us to turned out not to hold any animals at all; it was Fern Canyon, and above left is a picture of Robert feeding a scary fern part of our last donut. After that, though, we picked up speed and saw nearly all the animals except for the pandas--we'd seen pandas before, long ago; the lines were very, very long; and several zoo employees told us the pandas are never anywhere near as exciting as the polar bears, for instance. 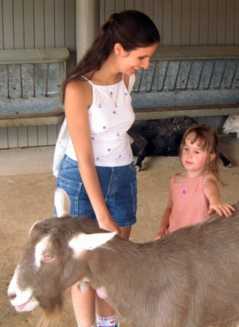 We liked the children's zoo, especially the petting part. Robert (above right, with a small girl frozen in the air jumping) was fascinated by a white goat who stood on a tree stump in the middle of the petting yard completely still. A little girl who reminded us of Aurora took me in hand and explained her preferred method for petting the animals (pictured at left: "First you stroke them like this, then you give them a little pat like this. . . "). We enjoyed the polar bears a lot--the only polar bear who wasn't asleep kept playing a very repetitive game of "move your toy near the water, throw your toy into the water, flop into the water after your toy, drag your toy back on shore, repeat." He was actually so predictable that we were able to get many good shots on the second and third loops--we never got one of his entering the water, though, because polar bears (at least when playing) are not too graceful in their "dives," and his belly-flops were difficult to capture. We also liked the elephants, hippos (though they were mostly submerged), koalas, ducks and birds, generally any really chubby animal or any animal eating, and of course, the largest rodent in the world--who fans of The Tick will recognize as a member of Speak's family; below at right is Speak himself, and at left is his relative in the zoo. 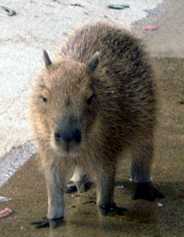 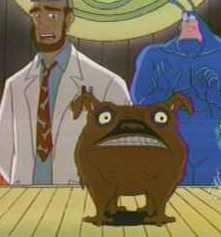 Can't get enough of our pictures of the zoo? Check out some thumbnails and full-size images of more of the animals up close!

We left the zoo at 6 and made our way to a Motel 6 in downtown San Diego (decent rooms, okay price, okay location, but absolutely terribly hard beds), and then walked around the Gaslamp District a litte bit, scouting out all the different restaurants until deciding on an all-you-can-eat rib special at Buffalo Joe's: I had beef, Robert had pork; both were very tender, though the beef were a little tastier, but both suffered from an inferior barbecue sauce (way below the Double Z). Still, we had a nice table by a window, the live blues music wasn't consistently far too loud, and overall it was a good meal. We did wonder, however, what ribs made with Buzzy's excellent barbecue sauce would taste like. . .