A Night at Matsuhisa: Review and Anecdotes 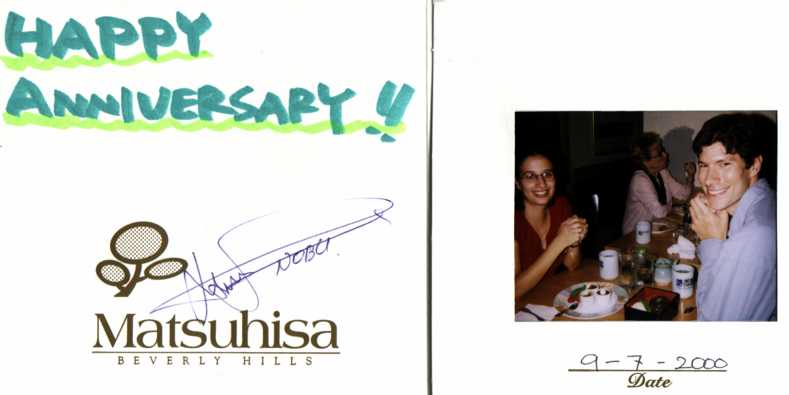 September 7th, 2000 was a Thursday, and the seventh anniversary of that seventh day of September in 1993 when Robert and I met. To celebrate seven years of sevenths, Robert picked me up from work at 5:30 and we planned on going out for sushi. But, we suddenly realized that we were together with the car in Beverly Hills at dinner time--something that doesn't happen too often--and that tonight was as good a night as any to go to Nobu Matuhisa's main restaurant on La Cienega. I've driven past the restaurant everyday for two years now, on my way home from work, and several times on a special occasion we'd called and hadn't been able to get a reservation. Somehow, though--probably because it was far too unfashionably early a time to dine at this restaurant, one of LA's most popular--we were able to get a reservation for just 6pm. We drove the five minutes over there, and found a spot on the side street at a meter (which expired at 6:00 anyway) which even had time on it (twenty-eight minutes, to be exact). We parked Norman and proceeded into Matsuhisa, Beverly Hills.

After a long consideration of the menu, we decided to get one omakase (chef's choice) for $70 for seven courses, and one $29 dinner with an extra appetizer. My dinner consisted of

Our extra appetizer was a plate of six small black mussels in a spicy garlic sauce garnished with asparagus; very good, but not quite the best thing at our meal. Robert's tasting menu consisted of We drank water and green tea with our meal, and managed to have a conversation with each other despite the celebrities (most of whom we didn't really recognize) who entered and exited; we did see Paul Reiser and his wife, who came in shortly after we did and sat at a table immediately behind Robert. They didn't seem to eat very much, though, and left long before we did. All in all, we were very glad we were sitting at a table instead of the sushi bar, as we were able to sample a great many of the exciting dishes; we loved the food and thought the $116 pre-tax and tip tab not at all too much for our meal.

I now need to talk a little about the atmosphere, because although our meal was delicious, it was not the only exciting part of our evening. When we were seated, the hostess, who was very nice, told the waiter to move over one of the tables to seat us more in the middle of the restaurant instead of against the wall. "Oh, we don't mind," we said, "we'll sit over there." The waitress explained that we couldn't sit near the wall, she was very sorry, but did we see those two silhouettes on the wall by that table? "Yes," we said, both separately thinking that they resembled Albert Einstein's silhouette, or a caricature of a mad scientist. She explained that the couple whose portraits they were were regulars and were coming in tonight, and always wanted to sit in front of their silhouettes. "I know it sounds a little strange," she said, "but that's the truth."

We were most of the way through our meal, however, before the people arrived; and when they did, we were certainly aware of it. Shouts of greeting rang out through the restaurant, and Nobu Matsuhisa himself, who had been flitting about the restaurant from kitchen to sushi bar, not pausing long in any one place, and recognizable mainly by his peculiarly patterned pants, ran over to hug and kiss them hello. The couple, a husband and wife in their seventies, and their nearly fifty-year old daughter, sat down at their table which brought them about six inches away from us. We smiled, and said hellos, since we were suddenly thrust into near-intimacy. Waiters immediately brought them dishes, without being asked, and the man treated the sushi chefs to beers and was in turn treated to a rousing toast by the happy chefs. The family, who appeared to be completely insane and not at all poor, proceeded to eat many lovely dishes, including a beautiful tuna sashimi salad with considerably more tuna sashimi than lettuce (our kind of salad!); nearly the entire time, Nobu sat at the fourth seat at their table, between Robert and the mad scientist man, and chatted with them.

At this point, we entirely failed in our efforts to maintain a conversation, and merely succeeded in listening to the disjointed ramblings next to us--the man informed Nobu that all his other restaurants, from Malibu to New York, were inferior to this one; they all discussed eyeglass prescriptions, world travel, Australia, other chefs, fresh fish markets, Hawaiian poke, and various other things. Periodically Nobu excused himself to greet someone else (not as profusely), or to disappear into the kitchen or to the phone, but he generally came back to the family near us before long. When our dessert arrived, we decided to bite the bullet and initiate conversation with the neighboring table. Noticing the daughter eyeing my creme brulees, Robert asked if they liked our desserts, and so a conversation began. We managed to tell them this was the seventh anniversary of the night we met, though we'd only been married for two years, and that we loved food ("You're too thin to!" the portly man exclaimed), can't wait to go fishing in Alaska and eat wonderful fresh Alaskan salmon and crab ("Not worth it," the man advised, "even the crab legs you get in Alaska are frozen, and there isn't any fresh produce in the state!"). The next time Nobu arrived back to chat with them, we were rewarded for our efforts when the woman started telling Nobu how this was our seventh anniverasry, but we were only married two years, etcetera, etcetera, and we loved his restaurant and his food. She did a much better job of telling all this again, especially to him, than we could have, and soon he was bowing and congratulating us, and we were complimenting him on his restaurant and our meal. Then he explained that the couple next to us (no, we never did catch their names) had been married for fifty years and had been coming here at least once a week for the past fourteen years, since he opened at this location, before several expansions, and that he'd had their silhouettes painted on the wall since they were such good customers ("Family!" the man chimed in). Nobu pointed out the silhouette of our waiter on the opposite wall, and the man pointed out Nobu's knife-wielding silhouette behind the sushi bar.

We took this opportunity to whisk out our camera, and Nobu, after fiddling with our digital camera, snapped the following picture of us (below left); behind us you can see the silhouette of our Peruvian waiter. Then Robert got one of the other waiters to snap a picture of Nobu and the gentleman (below right, with the tip of Robert's nose in the picture as well); note the very nice permanent shadow on the wall behind the man. When the main waiter found out it was our anniversary, he lamented that we hadn't told him ahead of time, and immediately rushed over with a Polaroid to take another picture of us; this picture (at the head of the page, with the woman and her silhouette behind me) he then inserted into a card, which Nobu signed and presented to us with our check, and our extra dessert was on the house. It was quite a whirl-wind meal, and when we left, we left mutual good wishes with the table next to us, and a message to Nobu (who had disappeared into the kitchen again) thanking him for the dessert and the pictures and the evening. Happy? You bet we are. . . dinner and entertainment, too. 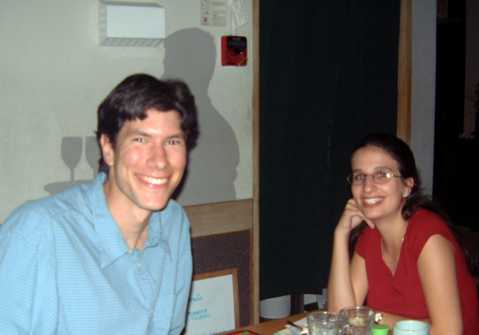 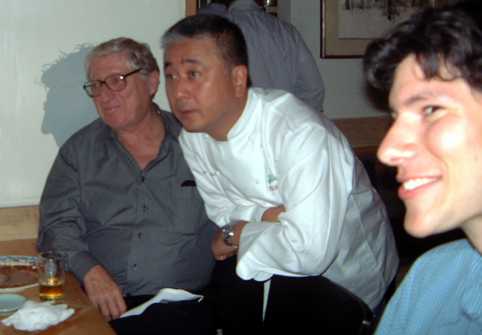