We left Los Angeles at 6:30 am on Sunday, June 27, to celebrate our first anniversary--for the second time!--with a weekend in Las Vegas. After picking up half a dozen donuts at a local store, we hopped on the 10 & took it East to the 15, the highway that would take us straight to Las Vegas. We had excellent cell phone coverage the whole way--Sprint PCS apparently gives higher priority to digital coverage in absolutely desolate areas of highway rather than in Culver City. We left early both to avoid driving in the hottest part of the day & to get there with more of the day to spare. With two brief stops & a forty-five minute complete stop due to a major emergency (people had to be lifted out by helicopter, & the entire highway was closed), we arrived at 11:30, ignoring the disturbingly large number of cars stopped, broken down, along the way.

We had heard that the Sunday champagne brunch at The Steakhouse, in Circus Circus, was very good ($19.95) but after going straight there & parking, we found out you need reservations (obviousiy atypical for Vegas brunches), & they were full for the rest of the day. We looked around the hotel a little & discovered they do a very good job of carrying through their theme--the place was indeed a circus, in a not wholly undesirable way, but with crowds, children, & an army of strollers--a peculiar mix of Disneyland & the Staten Island ferry terminal in summer. 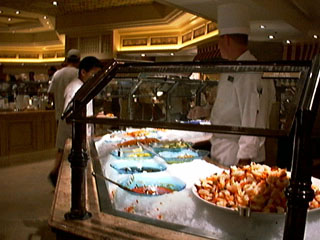 So we went to the Bellagio, which was supposed to have good lunch buffets normally. Their Sunday champagne brunch was $18.50, with a 40 minute wait to be seated. They have a very pretty lobby, & elegant restrooms. The buffet (pictured) was great--we made mimosas, & sat happily in the classy dining room. The highlights of the food were a mountain of peeled, deveined jumbo shrimp, good smoked salmon, a great make-your-own waffle section with a 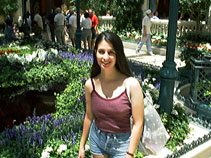 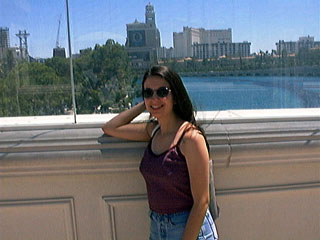 After lunch, we walked around the Bellagio a little more (pictured above are their indoor gardens and their lake) & took the covered walkway to Caesar's Palace briefly, before retracing our steps, finding our car again in the maze of parking, & driving down the strip to Mandalay Bay to check in. We arrived at 2:45, & by 3 were completely & smoothly checked in (we'd made reservations a month earlier via hoteldiscount.com, getting a better rate than from the hotel itself), & in our room. We'd asked for a regular ''deluxe'' room with a nice view, & ended up with room 14213 in the Fiji wing, & had a great view looking North-east on the Strip, with the mountains in the distance. The bathroom was especially nice--well-appointed, with 2 sinks & separate tub & shower, though perhaps typical for the big Las Vegas hotels.

We changed & went to the pool, which was lovely--a great 3-ft deep Lazy River ride, a lovely wave pool with 6-ft high, perfectly timed waves and a little sandy beach, and two regular pools we didn't go into. At first, we were disappointed that the Lazy River ride required a $10 rental fee for the giant inner tubes, but we soon discovered that the pool was nice just to float around in, even without a tube--the current was quite strong. And a nice family gave us their tube to use when they were done with it, so we were able to use it for a little while and then will it to another family when we were done with it too. 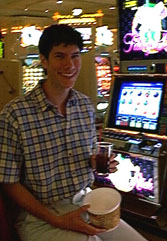 After we showered and changed, we went down to the casino for two free Cokes--$0.60 worth of nickel slot machines, and Robert suavely calling over the waitress, asking for "a Coke or two" (pictured with the Cokes). It was thrilling! Um, I mean the cheap Cokes, not the gambling. We didn't really get that, never mind understand the rules or understand how it could be fun. We then took the tram to Excalibur and looked around there a little, then walked over to the Showcase Mall near MGM. We gawked at people climbing the rock wall, we looked at all the expensive video games, and even played part of a fishing game someone had abandoned at Sega Gameworks. We went to the Coca-Cola Museum in the Showcase Mall, as well--I had been sort of excited about it, but the exhibits were not all that great, and $3.50 was sort of a lot for what you got. There was a man dressed up as a soda jerk, but he took his comedic routine a little too much to heart and was rather rude. 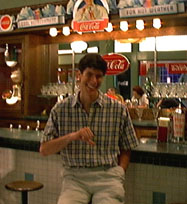 There was a very bland movie, as well. The highlight was the samples--there was of course all the fountain Cokes you could drink (though we had just had fountain Cokes at Mandalay Bay, that was good for comparison's sake--I preferred the Cokes there, though the staff here helpfully explained that this Coke is the ideal fountain Coke--just the right amount of syrup, a minimum distance to fall so as not to lose too much fizz, and the ideal temperature), and also there were thirty different kinds of soda that Coke markets all around the world--there was a very good ginger ale which is far tastier than the ginger ales in the US (this was marketed in Africa), and a German soda which is a mixture of Coke and orange soda. Robert got to try Mello Yellow, so he was happy about that. The only soda which was absolutely awful was Beverly, a tonic-water-like drink marketed in Italy, which was really quite bad.

After this, we walked to New York, New York, just across the Strip, and looked around there. We struggled to find the rollar coaster, and struggled even harder to find the Nathan's--having eaten a large lunch, we just wanted a light dinner. We rode the rollar-coaster around 11pm--a great all-around coaster, and then went back to our hotel, catching the end of the Excalibur "Something in the Moat" show, which didn't look all that wonderful anyway.