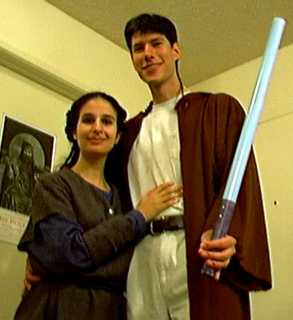 Ten years have passed since the elegant young Queen Amidala of the Naboo and the sensitive Anakin Skywalker met at the hands of master Jedi Qui-Gon Jinn. Now a Jedi himself, with his own hand-crafted light sabre, Anakin has once more crossed paths with Amidala, and the friendship begun ten years ago has grown into a passionate love. Her term as elected ruler of the Naboo behind her, Amidala now affects the simpler clothing and hairstyles she wore when she first met Anakin on Tatooine. The force is strong with both young lovers, and though they are happy together now, their future is still clouded. . . . 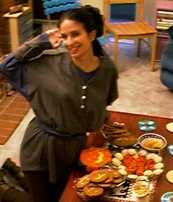 In their happy days, shortly before the conception of their twins and before Anakin became completely seduced by the Dark Side, Anakin and Amidala had a brilliantly social Halloween. They carved pumpkins, intending on mounting the smaller pumpkin (styled as a crown) on top of the larger pumpkin (the King Pumpkin), but finding to their dismay that pumpkins in the hot climate of Naboo do not last as long as they do in New York or Boston, and that the slightly mushy, barely week-old pumpkins were happier apart. 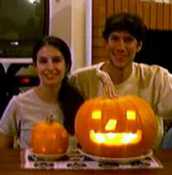 Anakin and Amidala gave a Halloween party for their friends (look at their classy evite below, with the real-time counter frozen at six hours pre-party-time). The total number in attendence was twenty, all of whom agreed that Amidala prepared some decent food (especially the famous Tatooine caramel apples, which were enjoyed by all). Of the adult guests, only Felipe and Amit came in anything resembling a traditional Halloween costume--look at Scary Amit! Manuela was dressed as a butterfly, complete with butterfly clips in her hair, and Jessica was a very nice pumpkin. Martin also tried to get into the Halloween spirit, by wearing what might possibly be called a creatively bizarre "costume" were it not suspiciously similar to his normal football-playing-attire. However, his effort was appreciated by all. 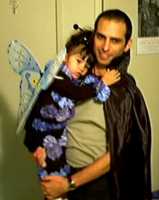 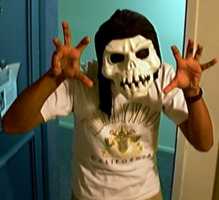 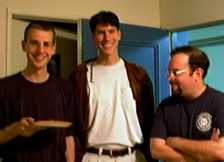 Pictured are Felipe and Manuela; Scary Amit; Wacky Martin; and Alessio, Anakin, and Jesse (Jesse, it must also be noted, came in a costume of sorts--a T-Shirt and casual clothes!).