Fourth of July fell on a Sunday this year, and we had a festive Boston Fourth the entire weekend. On Friday night, Robert met Cori (up for a visit from New York with friend Charles) and Valentina at King Fung Garden to share a Peking duck and other delights. I would have met them there too--instead of scarfing down a duck pancake on the T later that night--except that I was home helping the carpenter who'd been doing work for us for the last two weeks. The guy is clearly a master craftsman, and he did a wonderful job, but he is not fast: After two weeks, he finally finished (sort of--he has to return to actually hang the shelves in our built-in bookcase) two sets of built-in shelves and a windowseat with a hinged lid and small corner storage cubbies. When I met up with Cori, et al., on their way for ice cream later that night, I had already spent two hours picking up sawdust and moving some of his equipment downstairs ("Never again," he said of our fourth-floor walkup. "I'm not doing fourth-floor jobs anymore." He seemed not to find Robert's repeated references to "Barefoot in the Park" amusing, oddly.), so I was well on my way to exhaustion. Still, we had a nice time watching Cori demolish twice the amount of ice cream of everyone else, trying to guess Charles's age, and then wondering where Valentina's brain was when, after an entire conversation on the subject, and while sitting closest to Charles, she missed his age when he finally said it. Cori and Charles took the T back to Valentina's, where they were spending the weekend, and Robert and I went home to vacuum, move furniture, and dust until 1:00 in the morning.

Saturday was a beautiful sunny day, and we were up early watering the garden on our roof and cleaning off the roofdeck. My peas, tomatoes, and herbs are thriving, and some flowering perennials I'd planted on a whim in one of our sink-planters are also doing nicely. We refilled our Weber's gas tank in anticipation of a long day of grilling on Sunday, and we brought a carload of stuff to Goodwill to get some of the junk we'd been saving out of our house.

Then, we took a Zipcar up to see Robert's grandmother, since at almost 92 she's not able to make the stairs to our apartment to join us for a holiday. Instead, we took her out for hot dogs in Swampscott and then for a drive and brief walk in Marblehead.

When we got home, Robert decided to move the small air conditioner from our extra bedroom/office into our bedroom, and then our big air conditioner from the bedroom into the living room/dining room, so that we could have cool air in the front of the house during the summer. Moving two air conditioners is not a small job, and we really felt like we were back in the early days of renovations from the amount of effort we expended and dirt we encountered. Still, when it was all done, and we basked in the coolness of the living room, trust me--we were happy.

Sunday morning we had breakfast on the roof, just the two of us, eating goat cheeses (a French goat brie and goat capriola, from Lazy Lady Farm in Vermont--apparently our new favorite state to name-drop) and figs and crackers. Cori, Charles, and Valentina came over around 3:30 or so, bringing potato salad and a watermelon of whose quality Valentina was extremely uncertain. We stuffed the watermelon down in a large insulated ice chest and piled bags of ice on it (and since more people, over the course of the afternoon and evening, kept bringing more ice, it was actually perfectly chilled when we went to eat it at 9:30 or 10:00 at night), assuring Valentina it would be fine (it was--delicious, cold, and perfectly textured).

While Robert slow-cooked the ribs and Charles wrote political grafitti on our deck, I set Cori and Valentina to work helping me do the last couple tasks for the party--rolling grapes in prosciutto and spearing them with toothpicks, and then cutting little chunks of marinated chicken breasts and stringing them on cinnamon-stick-skewers to grill later. Cori didn't cut herself (or, incidentally, anything other than the prosciutto, which was good), and Valentina rolled the grapes expertly, so all went about as well as could be hoped.

By 7:00, there were almost 20 people at our place, including some members of my small group at Park Street Church, two very nice friends of Debbie's who I'd never actually met before, and who arrived before the very late Debbie, thereby causing no small amount of confusion as to who they actually were. I have to say, though, that Sam and David (the friends in question) are one of the nicest couples I've ever had the fortune to meet accidentally on my doorstep, and I was very glad they managed to find the right apartment.

Kristijan brought homemade bread, Jef brought the obligatory bottles of IBC root beer and cream soda, and Ben (late late Ben) brought some of the appetizer guacamole, which was nonetheless mostly eaten during desert. Most people didn't get too lost finding our place, even considering the number of friends who were from out of the area.

Two of the out-of-town guests included Alex and Lara, two Wellesley friends I hadn't seen in ages--I don't think I'd seen Alex since my wedding, actually, or Lara since our Wellesley reunion--who were in town for the weekend staying with another Wellesley friend, Lynn. 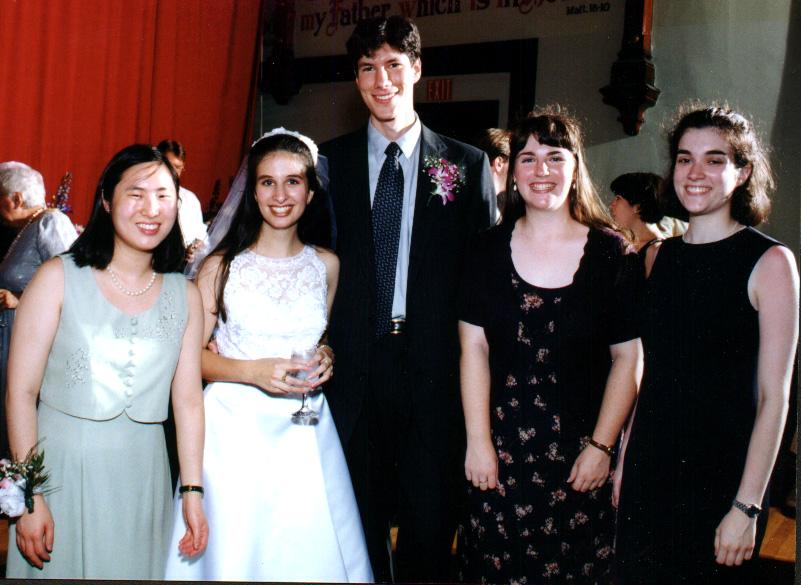 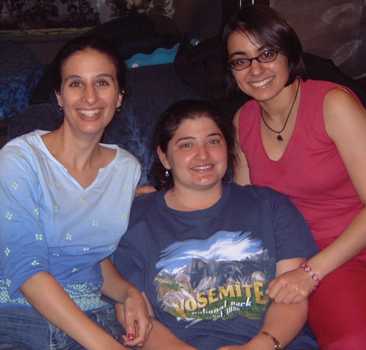 Home celebrating her birthday with her husband Gary, Lynn lent Lara and Alex to us for the evening so we could pose with Valentina (also an alum) on our roof, so we could stare at blimps and play hangman with children's sidewalk chalk on the side of our brick chimney, and so that we could sing "America the Beautiful" with a rousing "SISTERhood" during the fireworks display.

When it was dark and we were split between the living room--switching between the Pops and "Iron Chef" on TV--and the deck, waiting for the fireworks, Robert cut the watermelon with a large knife the way an Iron Chef cuts a bell pepper. He then wandered around offering watermelon to people, while Valentina--no longer nervous about the quality of her watermelon--relaxed and laid her sweatered-arms on a slice. "Does watermelon stain?" she asked anxiously. "No, not at all," I assured her. (Does it? Hm. . . )

The fireworks themselves--mostly, though not completely visible above the Sheraton hotel and next to the Prudential building--inspired glassy-eyed stares from a few, oohs and aahs and "they're not as good as New York's!" from a few others, and lovey-dovey couplehood hugs from most of the couples in attendance. Robert and I rebelled, with him discussing command-line interfaces with Ben and Charles, while I hugged several single women for good measure. Below, guests gaze at the fireworks while foreground Lara and Alex look into each other's eyes, Liwen and Tyrone get especially couple-y, and Annie, Debbie, and Sarah bond after way too much hangman while our drunken neighbors stand in the background on adjoining (but thankfully separate) roofs.

After the fireworks, some people left for bed or other parties or undisclosed locations, while the rest of us ate more watermelon, talked, and watched the early Jet Li movie "The Master" on our big screen.

Robert, Monday morning, seemed positively disappointed that there were only four leftover ribs, a couple small containers of leftover salads, and a small amount of trifle. "That's it?" he asked, as we heated up the ribs for breakfast. I think he was hoping the weekend would never end.