Friends and Furniture, February 2001
Robert's been calling everyone since Saturday afternoon (2/17), thrilled to tell them he completed his last chore in the setting up of our apartment. That's not strictly true, actually--we have six books boxes neatly stacked in our stairwell, which together contain books I decided to get rid of after schlepping them across the country, unpacking them, and thinking, "My god, I've actually saved this thing?" Most of them were books I originally got at library booksales, and were fine (or in some cases, not so fine) to read once, but are things I'd never want to look at again; some are books I got as gifts and never got into; and a few are duplicates. In any case, we have to find a used bookstore, library, or thrift shop that will take them off our hands, and this involves Robert's muscle. After the boxes are gone, we can think about hanging a few pictures and a poster in our stairwell--we can't do it now because we can't see things all that well down there. So, once these things are done, Robert really will be all done helping me set the place up.

Here's a picture of Robert and Howard playing Gauntlet when our living room was mostly, but not all, set up--still, we've come a long way! Howard is 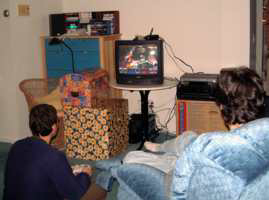 a nice guy who works across the hall from Robert and went to Hunter two years behind me. Howard has the distinction of

Howard works with Bob, another nice guy who therefore obviously works across the hall from Robert, though I don't have a picture of him yet; Bob has the distinction of

Anyway, our finally being all moved in called for a celebration, so we decided to try to get an assortment of our Boston friends to come over at the same time. Here's the evite we sent out:

(Upon entering our apartment last night for the party, George helpfully pointed out that the name of our party was somewhat of a misnomer, due to the six boxes stacked in the stairwell. I don't think George in particular should have talked, though, since having been here when the movers arrived a month ago this Saturday, he's seen our apartment with way more boxes in it.)

Most people actually RSVP'd, and no one got lost on the way--though we did get two last-minute calls for directions, one en-route, and one group of people climbed up the stairs at the neighboring brownstone and vainly knocked on the door. We ended up being eleven altogether: 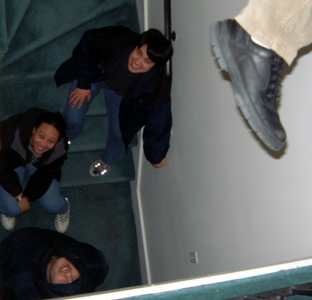 We ate a polenta tamale pie with beefy-bean chili, a vegetarian spinach lasagna, a nice interesting fresh spinach salad, soft drinks and juices, a cocoa banana cake, and butter cookies. Around 10:30, George and Michiyo, Erika and Tim, and Annie had to go, but after that we had an exciting round of Star Wars Triviopoly™, a game co-invented with Howard and field-tested for the first time that night by Robert and I, Debbie, Jef, and Howard. It involves a Star Wars Episode 1 Monopoly board, the questions and R2-D2 randomizer from a Star Wars Trilogy Trivial Pursuit game, and Regis's "phone a friend" lifelines in order to create fun-filled hours of Star Wars enjoyment. When we were still playing at 2:30 AM, we decided to have a cut-throat round with no lifelines or trivia question reprieves in order to bankrupt everyone and end the game. It still needs a few small refinements, but in general it's a very promising game. Debbie nicely offered to drive Howard and Jef home, and Paul spent the night on our futon. Since the next day was Presidents' Day Monday, nobody had to go to work (except for Robert, that is, who really could have mentioned this to me sooner. . . ). Here's a picture of the people left at our house at 3 AM, as they were heading out the door; Paul discovered that he could throw his leg over our railing in order to be included in the picture. Next time, we'll try to take more pictures throughout the evening.

Finally all of our furniture is in place--not everything is painted, repainted, or finished, as I'll do that on the balcony in nicer weather, but till then, this is what our place looks like. Not pictured are our dining room, balcony, or private stairwell (see above for that one). Clicking on each image brings you to a much higher-quality version. Enjoy the tour of the apartment!