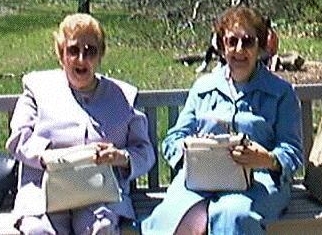 wrote the following essay and its attached biography for a class I student-taught at UMass Boston this semester (Fall 2001). The entire ESL reading/writing combination course focused on aging and wisdom, and the students read excerpts, essays, and poems by writers as varied as Malcolm Cowley, Amy Tan, Sharon Curtin, William Butler Yeats, Maya Angelou, Isaac Asimov, and Howard Gardner and wrote essays of their own about the texts. In addition, students interviewed an elderly couple--the parents of a friend of their instructor's--who visited the class to discuss their perspectives on the process of aging, and then the students wrote essays encorporating their experiences in the interview with their personal feelings and the course readings. In this particular case, the instructor, Teddy, and I also decided to write essays based on the interview, and we included our essays as well as the students' in a class book, complete with mini-biographies of each author above her or his essay. Teddy and I also led two classes based on our own texts, and the students seemed to receive these lessons--with discussions of authorial choices and the processes of revision--very well.

I really enjoyed working with this class. Mostly immigrants who arrived in the Boston area with their families an average of two years ago, the students were very intelligent and involved, and they approached their assignments, on the whole, with intensity and passion. Sitting in on the class, getting to teach a few class sessions myself, and tutoring and talking to individual students outside of class, I constantly remembered why I left the antiquarian book world for that of education.

On a personal note, I have to say that although Aunt Grace is the Aunt--of the two beloved Aunts, Mary-and-Grace/Grace-and-Mary--who will turn eighty first, in January 2002, for reasons of poetic license and authorial simplification, Aunt Mary is the primary figure in this essay. However, both of The Aunts (pictured above right) were equally in my heart as I wrote.

Born and raised in New York City, Christina Michaud graduated from Wellesley College and attended the University of California, Berkeley before pursuing her current studies at the School of Education at Boston University. Presently, she is student-teaching for Teddy Chocos’s ESL reading and writing class at the University of Massachusetts, Boston, while researching the second-language reading process. After completing her Ed.M. in December, 2001, Michaud hopes to find a position teaching college-level composition to ESL students. In the following essay, Michaud reflects on the interrelations between ageing and physical and mental energy, drawing on a recent interview with an octogenarian couple and observations of her own family.

The Energy of Eighty

A few weeks ago, my mother called me from New York to say that her older sister Mary started using a cane. “You should see her—she’s so stooped over she can barely walk,” my mother said. “She really needed the cane—I don’t know how she’s gotten around this long without it.”

After getting off the phone with my mother, I tried to picture my seventy-eight-year-old aunt with a cane. But when I thought of Aunt Mary, all I could see was a half-memory of her playing with me on her lap when I was a year old, singing a cheerfully tuneless, “Doopity-doopity-doop, doopity-doopity-doop!” again and again to the laughing baby me; then a memory of her holding out her arms and running toward me at seven or eight as I came to greet her, home from work, dropping her huge purse on the stoop and calling, “How’s my girl?” to me, loud enough for neighbors to turn and smile; and then an image of our family-full New Year’s Eves, when, after uproarious hours of penny poker and many meals, the ball would finally drop and Aunt Mary would turn on the stereo and dance—half jitterbug, half child-dance—around the living room with my cousin and me, at eight, at twelve, and at eighteen. In all of these images, Aunt Mary exudes energy—so much so that I couldn’t reconcile her with the stereotype of an old lady with a cane: passive, white-haired, and doddering.

Shortly after the conversation with my mother, I had the opportunity to interview an octogenarian couple, Mr. and Mrs. Fillos, who were guests of a college writing class I was working with that was studying the topics of aging and wisdom. After just a few words with Anthe Fillos, it became clear that she too, like the Aunt Mary of my memories, was a highly energetic woman. “Do you feel that you’re old?” a student asked Mrs. Fillos immediately after her introduction. Impeccably dressed and groomed, Mrs. Fillos was nonplussed. “No, I don’t feel that I’m old,” she answered firmly. “Well, when I turned eighty I did feel that this was it—that I might not have all that much time left—but I don’t feel old.” Throughout the interview, Mrs. Fillos stressed the importance of being around young people in order to continue feeling young. “You can’t just sit around all day, either,” she explained, in response to a student who asked how she spent her time. “You’ve got to keep busy. Everyday I try to have a project of some sort.” Not only does Mrs. Fillos spend time with her children and grandchildren, but like Aunt Mary and her eighty-year-old sister Grace, her daily projects also include everything from doing the laundry and cleaning the house to teaching Sunday School and participating in church activities.

By nature a quieter person than his wife, and because of a World War II injury, somewhat hard of hearing for many years, Mr. Fillos at first appeared to lack his wife’s characteristic energy and intensity during our interview with him. However, when something one of the students asked him turned the conversation to sports, Mr. Fillos became much more animated. “I love to play sports with my grandsons,” he said, reflecting on pick-up games of football and basketball. “But I don’t play hockey any longer—I did right up until a few years ago, but there are some things you just can’t do anymore. I still play football with them, though.” Once started on the subject of his grandsons, Mr. Fillos was difficult to stop. He told of tossing a ball around with his grandsons recently, until some other young people came along to join in. “Then I left,” he said, smiling, “and left the young people to it themselves.”

Though I was interested in their stories, my mind wandered a little while listening to Mr. and Mrs. Fillos. I just couldn’t see them only as themselves—two eighty-three-year-old strangers, really, whom I had never met until that morning. Instead, I saw Aunt Mary in them; I saw Aunt Mary’s older sister, my now-eighty Aunt Grace who, with the same bursts of energy that characterize her sister, danced unfazed in the aisle of our staid Protestant church only last Sunday, according to my mother, when the minister asked people to make a joyful noise; and I saw my own father and mother, in my imagination grown to be eighty as well, sitting there speaking out of Mr. and Mrs. Fillos’s mouths about past and present.

“John, tell them what you did just last week,” Mrs. Fillos was saying, when I dragged my thoughts back to the interview at hand. Obediently, Mr. Fillos told the students how he had dug up some bushes that had been in front of their house since he planted them himself, years ago. “I planted them, and now I wanted to take them out,” he said. “The neighbor removed his, and it looked good, so I wanted to do it too.” He became more energetic as he told about the hard work of digging up the bushes, about the physical aches and pains he felt the day after his yardwork, and about the near-physical sense of satisfaction at having done something difficult—almost too difficult (“To tell you the truth, I probably wouldn’t do it again,” he admitted)—that he had very much wanted to accomplish. It was clear that for him the process of uprooting the bushes on his own was a significant one, and that like his playing sports with his grandsons, it was the source of his enthusiasm for life. But I don’t think it was precisely the physical aspects of these encounters that gave Mr. Fillos his optimism and energy; rather, his optimism seemed to have come from the emotionally fulfilling aspects of these incidents—from the chance to interact with his grandsons, but also with a past vision of himself, who planted the bushes to begin with, and of whom his grandsons remind him—and to feel useful, valuable, and active.

For him as for Mrs. Fillos, this classroom visit was another one of his daily projects, another of those moments of interaction with youth. The day of this interview was one more day the couple found something to do, one more way of keeping busy, and of maintaining their positive outlook on life. For both husband and wife, who were impressed by the intelligence and respect of the students in the class, it was a chance to be around young people and to talk about subjects that excited them to an audience eager to hear them.

In his 1978 essay, “The View from 80,” the American poet and literary critic Malcolm Cowley writes that “simply giving up is the greatest temptation of age. It is something different from a stoical acceptance of infirmities, which is something to be admired. The givers-up see no reason for working. . . . but the men and women I envy are those who accept old age as a series of challenges.” As has my aunt, Mr. and Mrs. Fillos have certainly adopted Cowley’s view of old age. Always one of my aunts’ favorite holidays, this New Year’s Eve will be a challenge to Aunt Mary, but with or without her cane and her osteoporosis, I know she won’t give up on enjoying the day with her sisters and nieces. So, although Mr. Fillos and his wife may not do any more strenuous yardwork, and Aunt Mary may not dance with me quite as sure-footedly on New Year’s Eve, what sets them all apart from Cowley’s “givers-up”—and from my stereotype of faded, depressed, passive, cane-resting old folks—is an energy and enthusiasm that is embodied far more in their mental attitudes toward life than in any of their physical limitations or accomplishments.