The AndersoNet would be down for three days in August for maintenance and upgrades, and Robert wouldn't be able to access his data over the school network. So, thinking this was as good a chance as any to take a few days off, we quickly picked a final 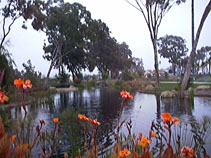 destination (Hearst Castle, in San Simeon, midway between LA and SF) and planned a two-day trip to the California Central Coast over Sunday and Monday, August 22nd-23rd, in the second August we've lived in LA. We had Amit and Martin over for dinner the night before we left, eating sushi handrolls, Vietnamese beef and vermicelli rice paper roll-ups, and baked stuffed nectarine ice cream sundaes, and our mini-vacation weekend began.

Early Sunday morning we headed straight for a couple spudnuts and then hit the road, taking the 405 west to 1, and then 1 north. Our first stop, after driving through fog so thick we barely knew the ocean was right next to our curvy road, was Santa Barbara, where we arrived at 9am, when not much was going on. It was still foggy and chilly. We parked the car and walked around a small park near the beach, inspecting an indoor carousel and some nicely landscaped water-gardens (pictured above). 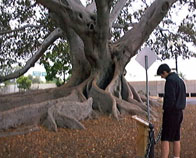 When the tourist information booth opened, just before 10am, we were able to pick up a detailled map of a self-guided walking tour around the city, and we started out. At first we walked down State Street, which was pleasant, if not particularly unique--Robert observed that Santa Barbara was every bit as nice as Santa Monica, complete with Jamba Juices and Barnes & Nobles. Eventually it warmed up and we saw a little sun; we walked over to a historic fig tree, the largest of its kind in the U.S., under which a thousand people could stand in shade at noon (six feet above the ground, its trunk measures something like 47 feet in diameter!). Robert picked a fig, but it was tiny and very unripe. 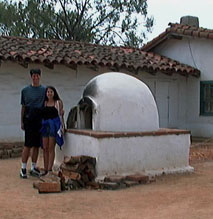 The sun was very bright now, and we were warm just carrying our fleece sweatshirts as we walked by the Santa Barbara Courthouse and admired the beautiful building. Then we stopped at the Presidio (pictured), which had been partially restored and rebuilt. You could walk through some buildings and peer into others, some of which were partially furnished as they would have been at the time it was active. There were lots of historic markers and "things to read" along the way. By this time it was noon; we headed back to the car and drove a little bit to a Mexican taco place I'd read about (La Super Rice, 622 N. Milpas Street, near Cota). We shared a quesadilla con chorizo, a cup of nicely seasoned beans with tortillas on the side, and some beef taquitos with avocado which was a special of the day. Lunch for two came out to about $9.

Back on the road again, we stopped at Nojoqui Falls County Park, 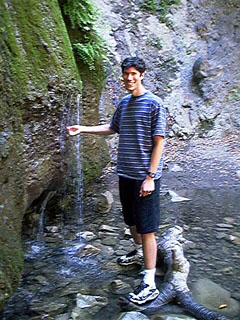 a pretty little wooded park with a short, easy hiking trail up to a waterfall. As we approached the end of the trail, we still didn't hear the familiar rushing sounds of water, though--Robert reflected that waterfalls in southern CA must have a hard time surviving, since it only rains about one month a year. The waterfall was very neat--it was made out of the same kind of rock as stalactites, and builds itself outward over time instead of eroding into the cliff like most waterfalls. Robert walked all the way foreward to touch the little drizzle of water, and again, my Canadian Nike waterproof hikers beat out Robert's American Nike waterfull sneakers.

We then passed through Solvang, a town which advertises itself for miles as an authentic Danish village; though the guidebooks always mention it, we found it not really worth the eight-mile detour. We thought the good-luck storks on the roofs were mildly interesting, ignored the blocks of kitschy stores, and stopped at a Danish bakery to eat a Danish "waffle"--two pieces of flaky pastry sandwiched together with buttercream and raspberry jam, too sweet for Robert's taste.

An ostrich farm near the side of the road in between Solvang and La Purisima Mission proved much more interesting--you could watch emu and ostriches wander about their fields (which we did), buy ostrich fillet mignons in a little store (which we didn't, being far from our fridge), and feed the emu for a quarter (which we did). The sign said to hold the bowl firmly with both hands, and I think this was a valuable warning, since the emu pecked at the bowl with much enthusiasm. Robert's feeding style was slightly more relaxed than mine--noticed my fully extended arms (both of them clutching the bowl). 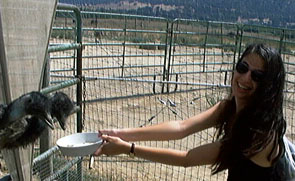 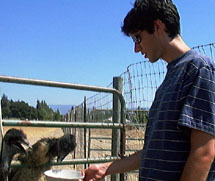