The Last Day We Ate at Buzzy's: 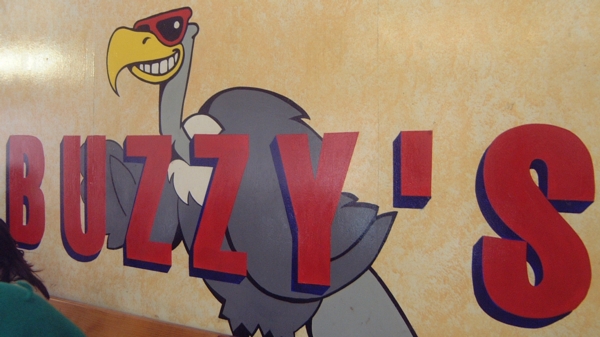 In March 2002, Mass General Hospital bought Boston's famous landmark 24-hour restaurant, Buzzy's Fabulous Roast Beef, and announced the restaurant would be torn down for new construction. Buzzy's closed, and Boston mourned. Seriously, it did--whether you went ahead and sent Mass General hate mail on the subject, wrote sentimental letters to the editor of The Globe, or just walked down the street commiserating with your friends, many, many people in the city of Boston were deeply upset at the closing of an establishment--an icon--like Buzzy's.

Robert and I had first gone to Buzzy's years ago, while I was at Wellesley, but I didn't become enchanted with its roast beef sandwiches and its atmosphere until a series of visits in January of 1998. Robert had had wrist surgery at Mass General in December, and when the cast came off, in early January, he had nearly no mobility in his wrist, and needed to go back to the hospital for physical therapy three times a week for several weeks. In Boston during my semester break from Berkeley, I went with him every day--usually, we showed up at the hospital at 7:30, or 8:00, or whatever awful early hour Robert's appointments were scheduled for, and then afterwards would take the subway to his classes. On those ravenous, freezing January mornings, we'd stop at Buzzy's on our way up the stairs to the Charles St-MGH red line station, and board the subway each with a steaming roast beef sandwich in our hands. The sandwiches were heaven: a soft onion Kaiser bun piled with rare roast beef, slathered with Buzzy's special barbeque sauce, with a slice of white American cheese, just slightly melted from the heat of the warm bun, all wrapped up in foil. On physical therapy days we usually just bought a sandwich each, but more generally we'd share a Super Combo #1: a photograph from Buzzy's menu follows, with the no-frills description so characteristic of a roast beef joint whose logo is a buzzard.

In the old days, actually--sometime before 2000--Buzzy's used to have napkins with their friendly, sun-glassed buzzard logo on them. We actually carried a stack of those napkins across the country in our '85 Camry, Norman, when we drove from Boston to LA in 1998, and later, upon returning to Boston and learning that Buzzy's now only carried plain brown napkins, were sad that we'd squandered them wiping sticky car-trip hands somewhere in South Dakota. Buzzy's was the first place we went to upon moving back to Boston: we flew into New York in December 2000, then rented a car and drove up to Boston on a Monday morning. As our landlord wasn't in yet, and we couldn't yet retrieve our key and let ourselves into our new apartment, and as we were starving from the early trip up, we drove straight to Buzzy's and broke our fast with a combo meal while waiting for our landlord. As I remember, even in December, the front doors were wide-open.

Another time, after Bernie and Elaine's wedding in western Massachusetts, Ben and Robert went to Buzzy's late at night, in a tux and a suit, respectively, and ate post-wedding roast beef. Buzzy's, actually, tastes best when eaten at untraditional hours of the day: 8:00 in the morning, or 3:00 in the morning, or any time far removed from conventional sandwich-eating times, suits Buzzy's the best. Robert's father even has memories of going to Buzzy's as a college student and young man, after the bars closed, weekend nights years ago, and he and most other people we know agree that it was the 24-hour aspect of Buzzy's--the anytime day or night ability to slake a barbecue sauce craving--that in part made the roast beef taste quite so good. On a side note, I don't believe Robert's father was a true Buzzy's fan, though--I've had arguments with him in which I've defended Buzzy's against the likes of Bill & Bob's on Route 1. To me, nothing can compare to Buzzy's.

With this many wonderful past memories of the Fabulous Buzzy's, Robert and I were thrilled to learn that on Sunday, March 17, Buzzy's would be open from noon until 6pm, or whenever the roast beef ran out, as part of a charity event. A regular combo meal and a last breath of Buzzy's air would be available for a suggested $3 donation to a combination of Boston charities. Knowing that, we picked up Howard and ran over. 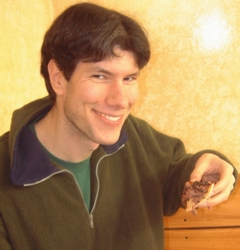 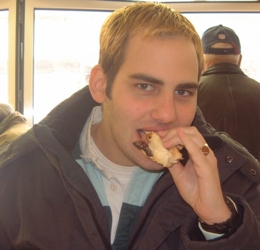 "I hope it's not too crowded," Howard grumbled in the car as we drove down Cambridge Street toward the river.

"Well, if there's a line out the door I wouldn't turn around and go home," Howard said, "but it would be kind of annoying if there was a half hour wait."

Robert parked the car a block before Buzzy's, and I leapt out. I started running, completely prepared to see the tiny, four-car parking lot full of people when I turned the corner, but though the restaurant was bustling, there was actually no line at all. We immediately ordered three combo meals. At left, Robert delicately eats his last-ever original Buzzy's roast beef, while at right, Howard tears into his. Each ended up eating a good third of my sandwich as well, since I, sadly, wasn't all that hungry and mostly filled up on the brisk, not-yet-spring air that filtered through the open doors, the aura of the Last Supper, and the crispy, skin-on thick-cut, dark-fried fries and lightly-breaded onion rings that accompany each combo meal. 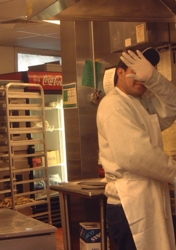 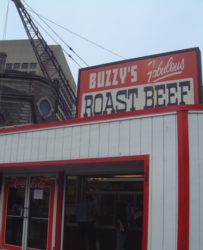 I wasn't the only crazed fan snapping photos inside and out like mad. When I peered into the kitchen through the pick-up window, one of the cooks, at left, either happily waved at me or deliberately covered his face, hiding from one-too-many cameras--it was hard to tell, but either way, I didn't mind. Howard drank his Fruit Punch, Robert his root beer, and me my Coke, and we never wanted to move.

What we didn't notice until we got home, and reviewed the picture at right, were the cranes, practically poised with wrecking balls suspended over the little restaurant, ready to tear it down the moment its one-day reprieve for charity was over. It was a sentimental time for everyone.

As we left, and I took pictures outside, the organizers of the charity event held giant "Honk if you love Buzzy's!" signs and tried to flag down passing cars, or at least get them to honk their horns in sympathy. This being St. Patrick's Day, however, around 4:00 in the afternoon, some motorists may have been a trifle on their guard when a half-dozen Boston-area youths came charging at their car, yelling, "Honk! Honk! Honk!" and gesticulating wildly. Though Robert somehow managed to be clueless about this, Howard and I resolved that we would honk to satisfy them as we drove by on our way home. We did--Howard and I waved, and Robert confusedly honked at our request, and thus ended our last day ever at Buzzy's Fabulous Roast Beef. 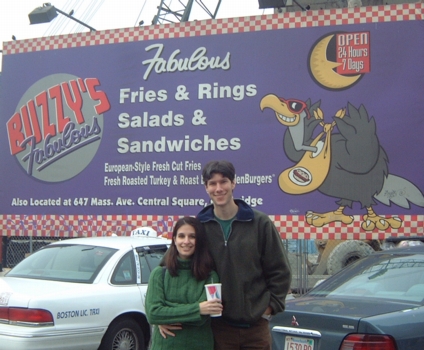