A Day at the Beach

Sunday, April 18th was one of the hottest, most August-like days we've ever seen, and so we decided to go to the beach. Venice Beach and Santa Monica Beach are both nice for rollarblading (in particular, Venice Beach has a great ice cream place which can usually motivate me), but there's no free parking and we'd been to both several times 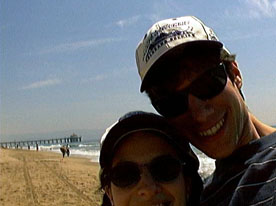 before, so we headed south to Manhattan Beach. I think part of Robert's plan was to stop at Fry's, an always crowded, always unhelpful computer store he loves, but for some reason we missed them going and they were sadly closed when we finally were driving home.

At Manhattan Beach a little north of the pier (you can see it in the distance, in front of the hazy mountains) we found a nice free parking spot half a block from the ocean, so ideal for a stroll along the beach that we shelved the thought of rollarblades. We walked along the beach down to the pier, wearing our newlywed baseball caps, sunglasses, and the first shorts of the season, but we still felt funny and Eastern, since the beach was crowded with people in April, only some of whom were as pale as we were, and there seemed to be miles of beach volleyball courts, each with two teams of good players. The fact that I was going for the Princess Leia looped-up braids 'do, while most other women had blond ponytails, didn't help, but I still admire Leia's hair. 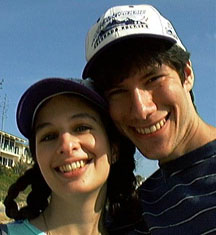 We walked out to the edge of the pier, watching some men fishing over the side. While we thought they might only catch surfers (actually, I like to think of them as "floaters," since all they do is float hugging their surfboards while looking for good waves), one actually came very close to catching what he said was a zebra perch. It was a pretty fish, too, but it got away. At the end of the pier is a little oceanography museum, with tanks full of starfish and seaslugs, and signs permitting you to "gently touch the sea animals with just one finger." There were also several varieties of shrimp, all of which looked as though they'd fry up very tastily.

Then we walked around the town a little, eating some fish tacos and then a Jamba Juice for lunch, and then walked back to the car via the beach again. This time, I took off my sneakers and walked in the water, which was cool but still pleasant, while we collected shells (ostensibly for Aurora, the poor land-locked child), and Robert 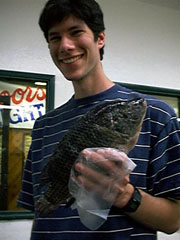 We drove down to San Pedro, because someone Robert had sat next to on a plane said there were excellent fried clams "at the end of the 110 freeway," and we were in a mood for seafood. Armed with such information, it's amazing that we actually found ourselves at the Ports of Call Harbor Village, at a string of little fish markets/fried fish restaurants. We chose one based on the attractive fish walking by on people's trays, and walked into a fish market where you grab a plastic bag and choose your fish. We got a nice tilapia (pictured), 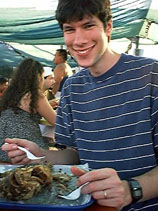 almost three pounds, and a .7 pound blue mackeral. You take your fish over to someone who weighs it, charges you per pound, plus $1/lb to cook it (though they were very nice and generous with the rounding, for the sake of easy change--our two fish totalled $12 according to them), scales it, cleans it, and presents it to you in another plastic bag. Then you carry your fish out to the barbecue, where they'll either fry your fish for you or barbecue it. If you'd wanted to, you could buy vegetables or potatoes and they would barbecue those along with your fish, to put in tortillas for fajitas, but we chose frying, with no veggies on the side--being good New Englanders.

You carry your tray out to tables on the water, where you can watch big ocean liners and tug boats, as well as fishing boats and the ferry to Catalina Island, go by, and while mariachi bands stroll around, you eat your fish happily. It was juicy and great--and Robert made sure no meat was left when we were done. We walked around a little more, ate a churro with caramel poured inside it (next time, though, we'll make sure to get the 2/$1 churros, even though there's no caramel inside them, as they're a better deal), and looked at other shops and restaurants, and then drove back home, after a lovely spring day at the beach in California.