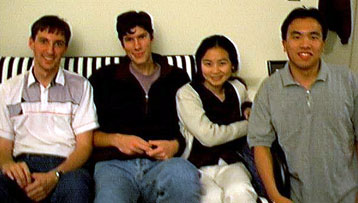 were the entire entering finance Ph.D. class at the Anderson School in the fall of 1998. The program was small, Los Angeles was new to everyone, and close bonds of friendship were formed. . . 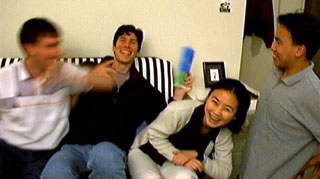 and strained. Robert and Martin are here disagreeing about the attractiveness of the cover of this book on bootstrapping, and whether or not it should be included in their group picture. Ashley and Justin are trying to get out of their way.

Other notable events of the four students' active social lives included the annual fall finance picnic. Here are Robert and Ashley and Matti Keloharju with Shu, a third-year student, and as such, a cook for the day. 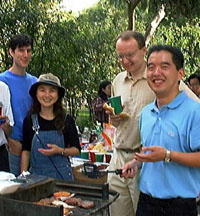 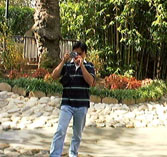 Martin was on Robert's right, but was cut off by someone stepping in front of the camera and has been subsequently cropped out. Justin is busy backing up into a little stream, trying to get that perfect photo.

On Halloween, 1998, an exciting time was had by all at a finance student party. Robert was a vampire, attacking mainly cupcakes. Martin (shown with Amit, a second-year student who was not in costume) was a lone Man in Black. 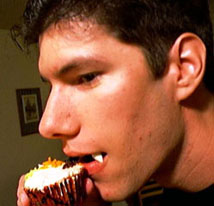 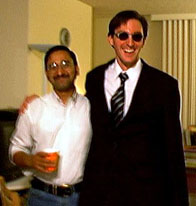 After dispersing for the holiday break, the four friends met up again at Justin's house. Justin had previously boasted about his ability to cook breakfast, especially "the best dish in Wisconsin [where he was an undergrad], eggs with onions." So, the Sunday morning before classes started again, Robert called Justin at 10:15 to let him know he would soon be cooking breakfast for some hungry people, who showed up a few minutes later bearing onions. Justin claims it was only his excellent ability to withstand a crisis that got him through the morning calmly. His spectators watched eagerly, until finally everyone was able to happily eat their own plate of the much-acclaimed Wisconsin eggs with onions. 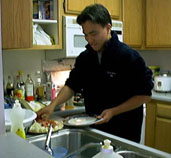