With a spacious garage and driveway, and ground-level entry, our new house was obviously going to change our lives in some ways. Yes, we realized that it was time--we needed to buy a bike! Or, rather, two, one for Mom and one for Dad, to carry about kids and lots of stuff.

Once the fun of the giant boxes was out of the way, we could enjoy the bikes themselves. Robert will mostly carry Samantha as a passenger, but he can bring Marcus too, in a pinch.

I can carry one or both girls, as the three-point seatbelts adjust, and when, on a family bike ride, Samantha decides she's done riding, she needs to eat her popsicle, no problem--pop her bike in my cargo bucket, and we're still good to go.

I've ridden on the bike path in the Southwest Corridor almost daily last week, but only on the street once. I'm still getting a feel for the bike, but I'm excited for a long summer of riding.

July 8 update: I've been riding on local streets and the bike paths, both alone and with Robert leading, about three times a week on average. What fun!

Parking is challenging but doable.

I got reflective stickers for evening riding.

We practiced with a friend.

Robert practiced towing Marcus's bike, just in case he ever needs to.

I got an entire cartload of H-Mart groceries, including a case of mangoes, in my bike, along with Helen (Samantha was on Robert's going home).

Robert took Samantha out to see fireworks on the Fourth, and then he rode Cori down the street to an evening festival a couple days later.

Robert got a cupholder... and an electrical assist, which makes it a lot easier for him to cart around multiple kids. Don't worry, the baby didn't ride, and those who did all donned helmets--this was just sitting in our driveway!

I've acquired more stickers... and many more hours/trips/miles of riding, back and forth to Samantha's piano camp in the South End, to Titus Sparrow Park, to Marcus's circus school, to his tennis lessons, to the library, and the farmers' market, and Roslindale. 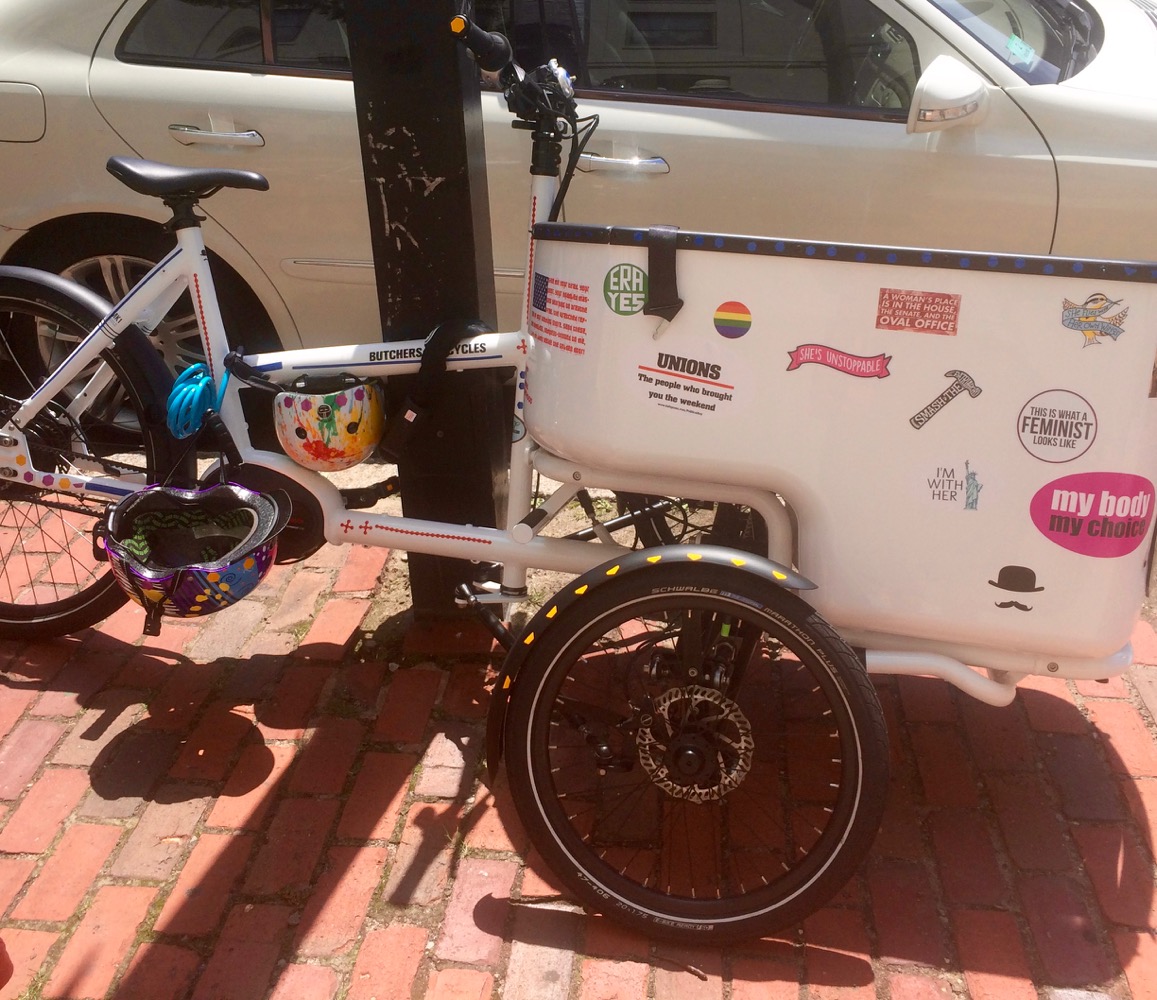 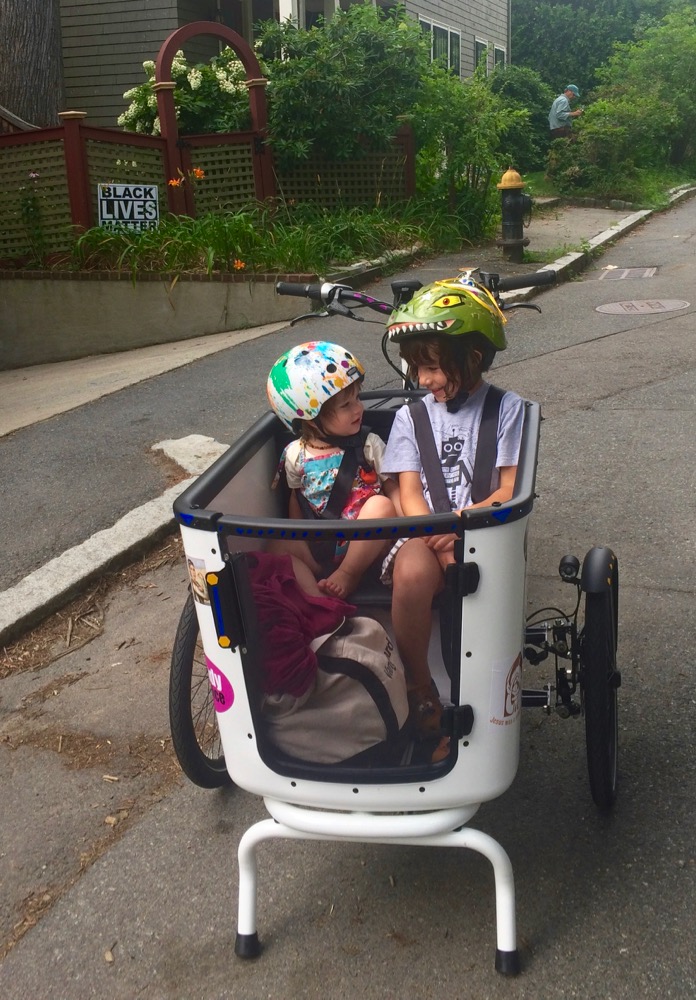 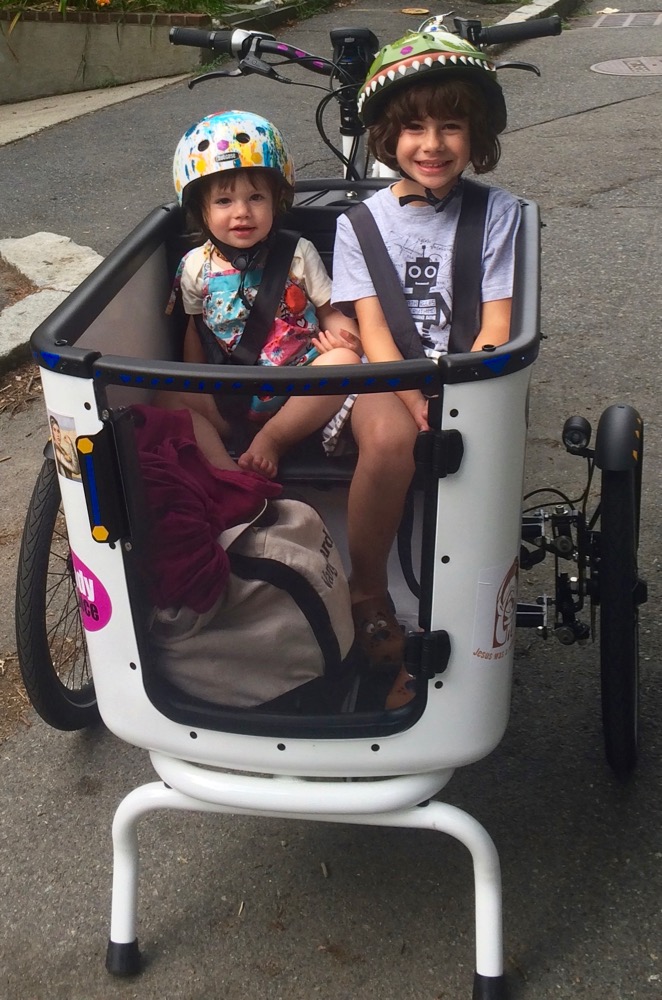 We've figured out a good rhythm for locking up the bike and switching to a sling for inside errands.

Bikes of the past:

Balance bike, Marcus and then Samantha, ages 3 and 4 respectively 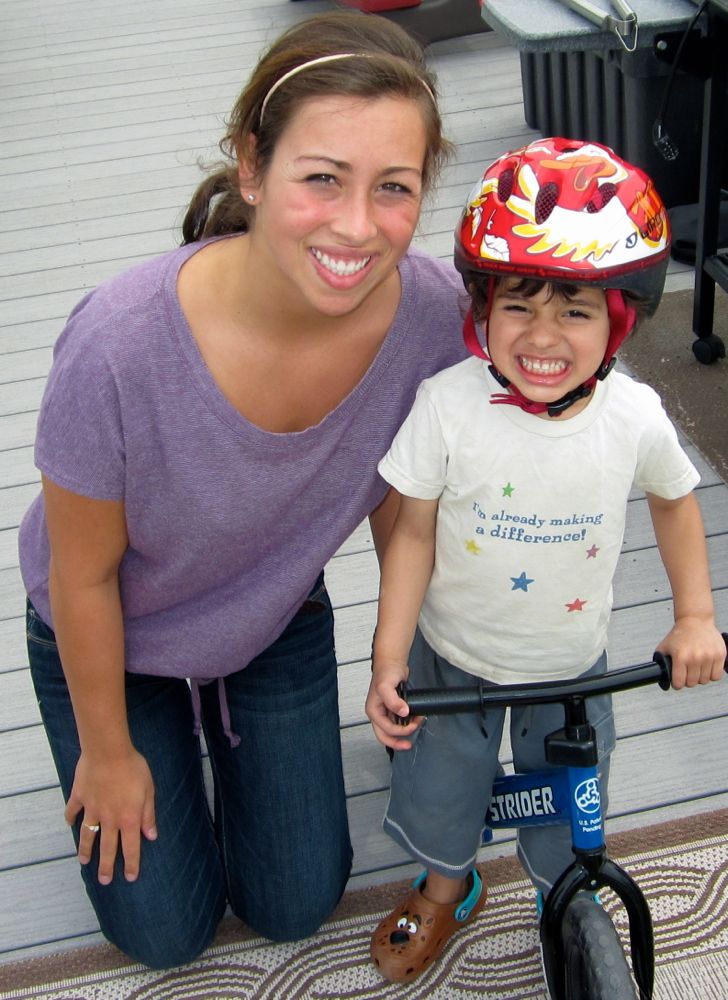 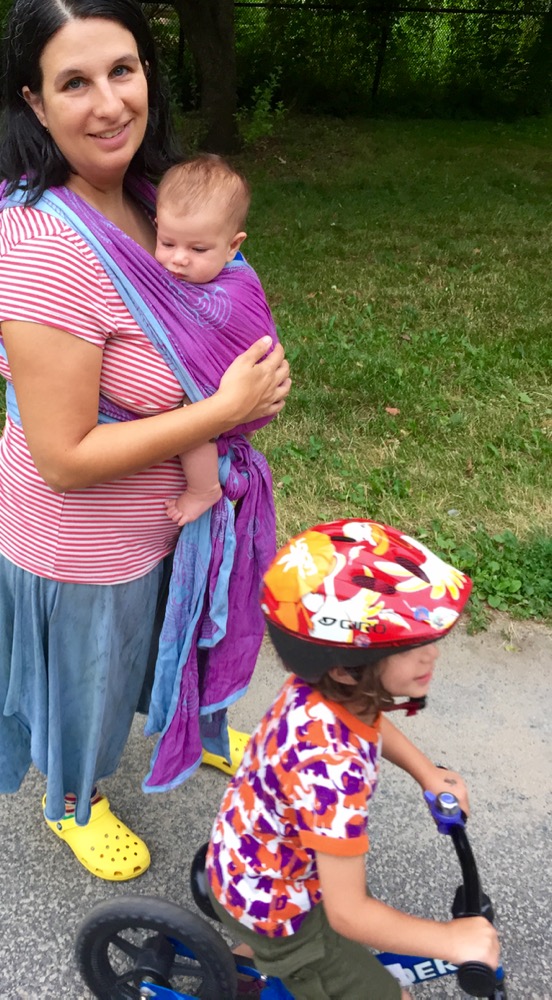 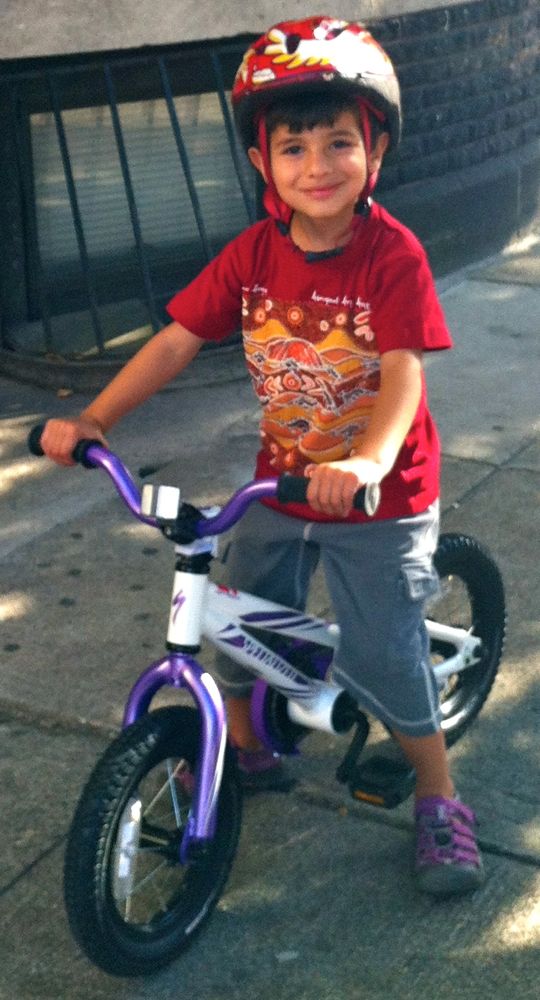 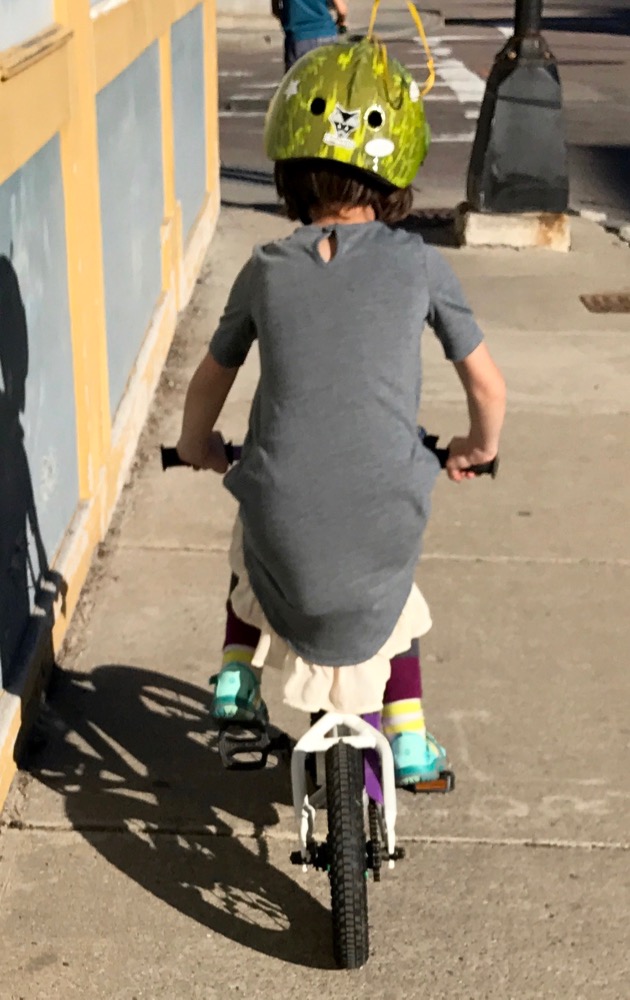 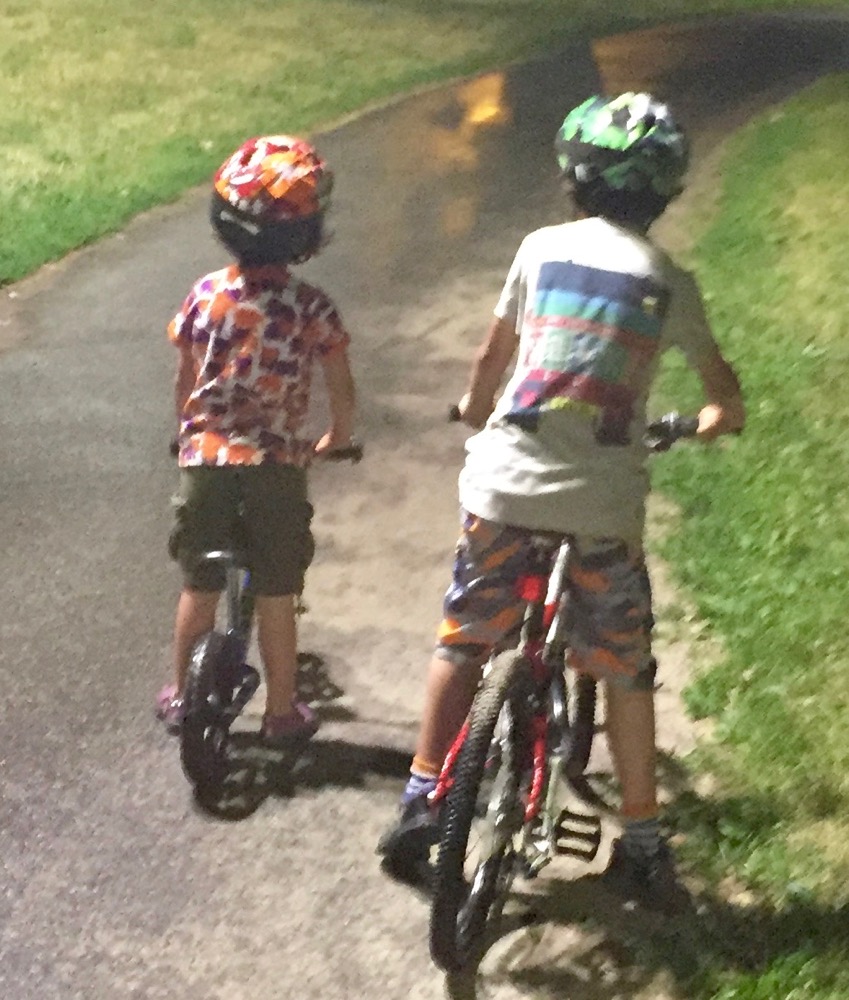 ...and now also the current bike for Samantha:

2018 update: Kids are bigger, but we're all still riding! Even with a cello!