We spent Thanksgiving at my parents' house in Bayside, Queens. It was a great five days: Marcus and Sammy had a ball playing with all the toys at Grandma and Pop-pop's and Aunt Mary's house, to say nothing of the doting relatives themselves. Despite his silly face above, Marcus really had a wonderful time.

On Thanksgiving morning, Robert, Marcus, Samantha, my father, and I went into the city to watch the Macy's parade. Marcus had a blast seeing the giant balloons, and it wasn't too cold. Sam slept through almost all the parade and much of the subway ride back into Queens.

After the parade we stopped at a Chinese mall on Roosevelt Avenue in Main Street Flushing and went to their food court. Marcus was fascinated watching the guys making noodles. We got a bowl of noodles and Samantha tried to eat all the broth and Marcus all the noodles. We went back the next day, too, and one of the noodle chefs gave Marcus a piece of dough to try to form himself.

When it was turkey time, we attempted to replicate this classic picture of Marcus from 2008: 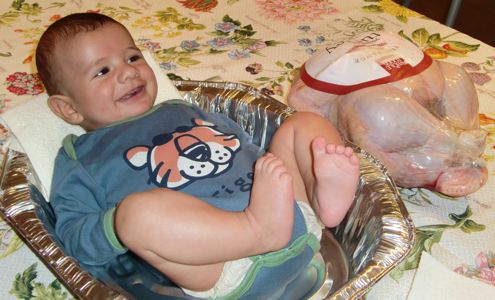 But in the end all we ended up getting was this picture of Marcus and this one of Samantha:

Thanksgiving dinner was just the seven of us, but we had a really nice meal with an excellent apple pie from Aunt Mary.

Tired out from all the fun, our kids watched a video at the end of the day and crashed to sleep.

During the weekend, we played many games of Go Fish in the apartment; we used the building's playground; we took advantage of trash rooms and elevator rides for entertainment; and we enjoyed meeting and petting some neighbor dogs.

Two days in a row we went to the New York Hall of Science, which has free reciprocal admission with the Boston Children's Museum. It was great--Marcus got to watch a dissection of a cow's eyeball, we got to make giant bubbles for what felt like hours (fun hours), and Sam got to crawl around the preschool play area.

We had very smooth connections and good flights on the way down and back, despite the holiday weekend, and it was just a lovely Thanksgiving from start to finish!

Some movies from the weekend: