Robert had to go to a finance conference in San Diego, so we flew out to Los Angeles two days early, rented a convertible, visited old friends, and drove down the coast to the conference, which was at the Hotel del Coronado. After the conference we drove back up to LA, saw more of our California family and friends, and returned to Boston the next day. While we were in LA, we took a walk near the Santa Monica Pier and ate Kettle Corn; we drove around a lot in our convertible, drinking Jamba Juices and making Jason leap into the backseat; we stayed with Brigitta and Ryan one night and Amit, Elena, and Dog (below) one night; and we had lunch with a crowd of finance students at a little Thai place in Culver City. 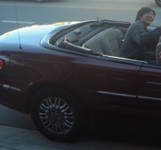 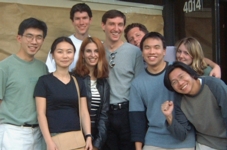 Saturday morning before lunch, Robert played football on the Santa Monica beach. We saw a lot of beaches--we also walked along the Del Coronado's private beach before the last day of the conference--and we got all dressed up for the conference's black-tie dinner. Sadly, this is the best picture we have of that night, and it was taken by Robert in the mirror of our hotel bathroom. Back in LA again, we had dinner with the California cousins at the Claimjumper--pictured below is everyone except Carl, Cindy, and Corey, who had to leave early, and Sal and Annie, who arrived later.

About a week before Christmas we got a huge tree from Home Depot and had fun putting it up and decorating it. The helpful Home Depot guy basically Saran-Wrapped it on top of Norman for the short drive home in the rain, and then Robert got to carry it up five flights of stairs. Then, just a few days before Christmas, Christine, Naimath, and Aurora flew in to spend the holiday in Boston. Everyone had a good visit, and we were thrilled to finally get to spend a Christmas with Aurora (aged 7 1/2 at the time). We took this group picture the Sunday before Christmas at Grandma Helena's house--unfortunately, Naimath wasn't in the picture because he was off studying for a medical school exam. 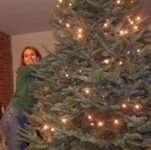 While she was here, Aurora and I decorated and assembled a gingerbread town, eating about a pint of frosting in the process. On Christmas morning, a patient Aurora sat waiting to open her first-ever Christmas stocking, at 7a.m. A few hours later, a still-sleepy Naimath and Christine played with some of Aurora's stocking-stuffers.

We spent New Year's Eve and New Year's Day in College Point, with my family. New Year's Eve involved much eating and playing of penny poker, Michigan Rummy, and Taboo. On New Year's Day, we celebrated Aunt Grace's 80th birthday and Robert's 29th birthday. I made both cakes--an angel food cake with grapefruit curd on the side, and a maple-walnut layer cake with a coffee buttercream frosting, which Maria carried over to Aunt Grace with the sparkler candles flashing. Aunt Grace beamed as she opened her presents--a giant basket of Este Lauder smellies, and a box of notes written to her by the entire family. 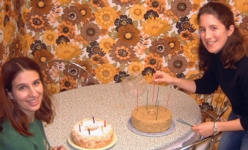 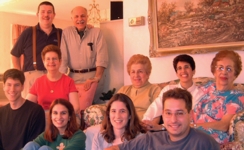 Christina and Robert are proud to announce the birth of. . .

Darwin2, the new iMac, was announced on January 7th, 2002 at MacWorld. We love LCD flat-panel monitors; we were excited about being able to burn not only CDs but also DVDs; and we were celebrating on that very day our 100th 7th monthaversary of the day we met, so we ordered it that same day. It arrived nearly a month later, a few days before February 7th. We placed it in the living room, next to the big comfy chair from Uncle Frank, and after unpacking it from its alien-looking packaging, Robert immediately sat down to play a game on it. We delivered the original Darwin (PM 5400/120) to Cori in New York, as a free upgrade for the Classic II she was using up until this moment. Darwin2 is gorgeous and speedy, and we love it. Just last night, George came over because he needed to rip a CD into mp3 tracks to use as the soundtrack for a video-editing project--all the while playing music through our stereo system, Darwin2 assisted him flawlessly. 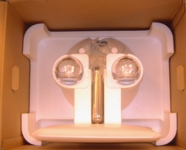 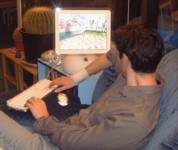