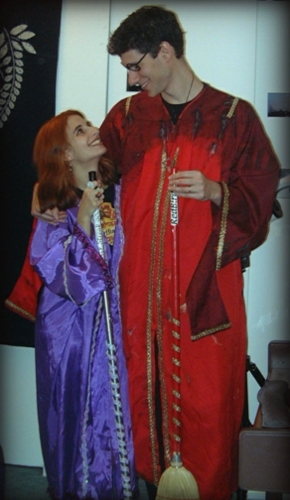 The Story of James and Lily Potter, Wizard and Witch

Lily Potter's parents are Muggles. They're cute, and Lily and James love them, but they are still Muggles. So, when they came to visit Lily and James in October of this year, the four celebrated an early Halloween in a way completely acceptable to Muggles: they went out to eat very tasty but very non-magical lobsters and crabs, and they carved a pumpkin. Below you see a picture of Lily's Muggle Mom and Dad, taken earlier this year; a picture of Lily's Muggle Dad and James, about to carve pumpkins (incidentally, James's hair is looking unusually tidy in this picture, and he seems to have forgotten his spectacles!); the pumpkin they carved (all by hand, no magic involved, for though they are very accepting Muggles (especially given their other daughter, the now-Mrs. Dursley we all know and despise), they are still Muggles, and rules are still rules); and two other pumpkins that James and Lily carved later, alone, with the help of magic. Look at the way the magical pumpkins show themselves off in a much better light than that Muggle pumpkin, and also note the freckles on the bottom right-most pumpkin, to match James's own freckled face. How come all their pumpkins this year, magic or Muggle, bear lightning-bolt ears? "I don't know, exactly," Lily confesses, "but for some reason, James and I've always considered lightning-bolts lucky. We have a strange feeling about them, and sometimes, I dream about them. We might even wallpaper a room in our house with lightning-bolts, someday!" she concludes, enthusiastically. "We might what?" asks James, paying attention for the first time at the word "wallpaper." 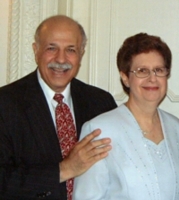 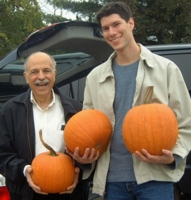 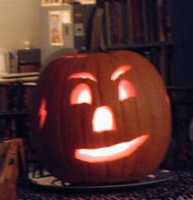 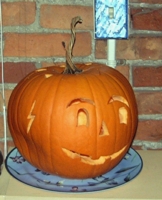 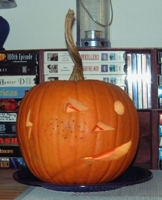 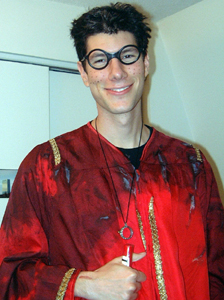 James's hair, untidy as usual, peeks up above his spectacled, freckled face. "I've always loved Halloween," he reflects. "It's always been my favorite holiday. You see, it's the only holiday that's really a wizard's holiday, and it's just always felt very special to me. Still," he continues, "Lily has always been more involved in the preparations for holidays than me, and Lily was the one who made me wear my ceremonial gold-trimmed red robe tonight." James also sports a wizard's watch around his neck, a brand-new RedBird III broom, with a new, improved core for high-speed flight ("It's cut my commute to the Ministry in half," he boasts), and his usual, eleven-inch mahogany wand. 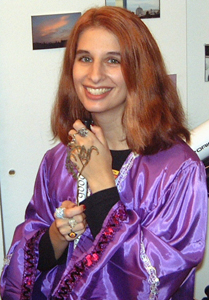 Lily's hair is red, and her eyes green, unlike dark-haired, dark-eyed James. but the two have been inseparable for years. "Of course, we both went to Hogwarts, both Gryffindor," she explains, eagerly, smiling as she talked about her husband, "but we weren't a couple at Hogwarts. James had his friends, and I had mine, you know how it is. Then, right after high school, we met at this Wizards' party I was at. I saw him and absolutely fell in love, so I flew over to him, and, hovering mid-air so he could see me--he's much taller than me, you know--I said, 'Hey, didn't you go to Hogwarts?' and that was that." That was that, eight years ago, as a matter of fact. Now married for over three years, the two have many friends in common, and much shared history behind them. "Someday, I'm not sure when, we'll have a child, or maybe two," Lily says. "I don't know what James and I would do if it wasn't a Wizard--I guess we'd love it anyway, but it would just be awful if our kid didn't get into Hogwarts. I already have a list of possible child-names on a scroll--do you want to see it? People've been suggesting the name 'Harry' to me lately, but I also have lots of other possibilities." She pauses for a breath, and James takes the opportunity to weigh in: "Most of Lily's child-names are pretty--um, eccentric," he says, "Really, 'Harry' is by far the best name on the list." This Halloween, though, kids are still somewhere in Lily and James's future--silly Lily, as her husband sometimes calls her affectionately, is clutching her ten and a half-inch willow wand, while wearing her purple ceremonial robes and a lot of glitter and glittery rings. "I also put on new pink stockings," she volunteers, "and do you see my new broom?" Her broom is the much-coveted, Silver Streak 9000, a new model for this season, endorsed by the National Women's Quidditch Team (NWQT). "Mostly, I chose it because it matches my robes," she confides.

Since they were feeling so festive and so much in the holiday spirit, Lily and James decided to have a Halloween party this year. The couple is open-minded enough to have both Wizard and Muggle friends, so for this party, they specifically requested Wizards not to use magic, since Muggles would be in attendence. They also decided to play Muggle-style Halloween games, such as bobbing for apples. The lovely apple tub is courtesy of Lily's parents, of course; it was filled by the combined efforts of James and Lily's guests, lugging pots of water out onto the porch. James grumbled a lot about how much easier it would've been to fill it with a Waterful charm, but Lily reminded him of their guests, and he soon set to work filling pots. Walter the Vampire was also a big help in filling the tub. 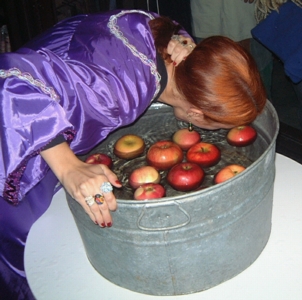 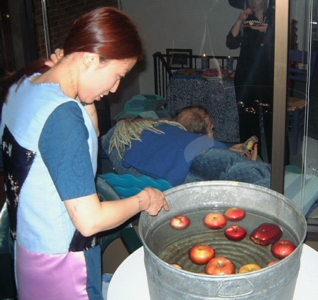 Lily (above left) hadn't bobbed for apples since she lived with her Muggle family, so she was very rusty. She never did manage to get an apple, actually. Annie/Sallie (above right) is here pointing at her chosen apple. She set her sights high, on a nice Fuji apple, but found the task harder than expected. Debbie (below left) is actually pulling the apple out of the water with her teeth at the moment of this picture--quite impressive! Blue Fairy Susan (below right) approached her bobbing with intensity, knowing that towels were at hand to dry off with afterward. 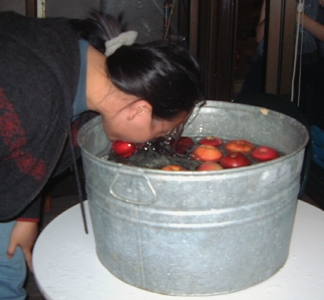 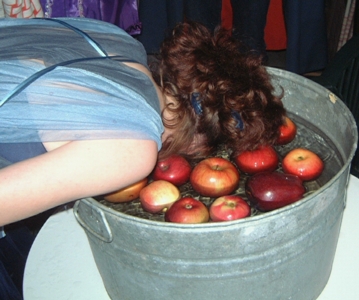 After several attempts, Vampire Walter (below) has just pulled the apple out of the water. Not pictured in this apple-bobbing event are Hippee Paul or Vampire Susanna, who extracted their apples stem-first, unfairly enough; Witch Valentina, who didn't attempt the apples due to a new makeup job; nor Muggles Asaki, Yuko, Howard/Bulletta, or George, all of whom left just before, and possibly just because, of the apple-bobbing. 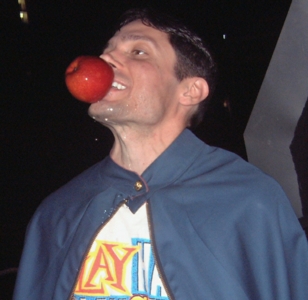 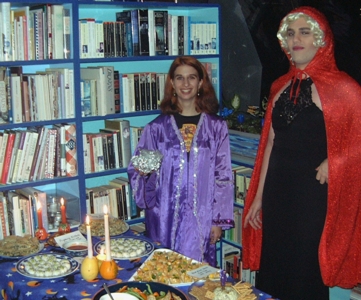 Lily enjoys Muggle food preparation, although James has never begun to understand her fondness for it, and so she made all the food for their party the Muggle way. Here, she stands near the table with Howard/Bulletta, who walked right out of a video game to attend their party. 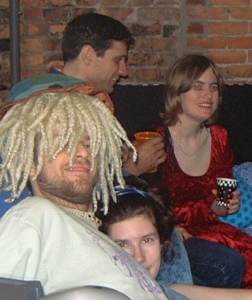 Here're two couples in attendence--in the foreground, Paul and Susan, and in the background, Walter and Susanna (two vampires who were late making their way to the party because they had to make sure the sun was fully set first). 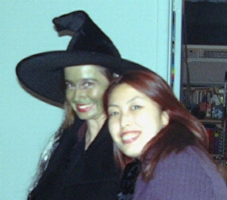 At left is Valentina, a fellow witch and a reporter who works for a subsidiary of The Daily Prophet, and at right is Annie, a Muggle attired for the evening in the hand-made costume (unfortunately not very visible here) of Sallie, from A Nightmare Before Christmas. 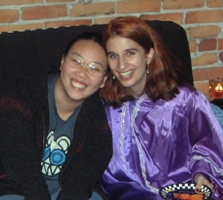 Here is Lily with her old college chum Debbie, dressed as a Debbie. 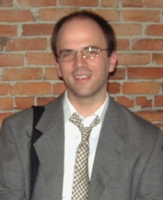 This is George, dressed in his costume (sans paper-bag mask, which was kind of the entire point, actually) of The Unknown Comic, from The Gong Show (a Muggle TV show that Lily wasn't very familiar with). 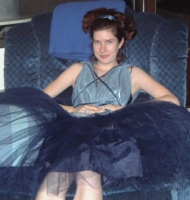 This is Susan, a blue fairy (out of Andrew Lang, if you so choose), with her wings (also blue) invisible behind her as she sits in the big blue chair. 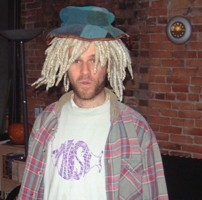 This is Paul, dressed as a Muggle hippee. Dimly, the clock behind him says it's 1 AM and time for all good Wizards and Muggles to head home.

Check out these pages Lily and James found in their websurfing, depicting the Halloween events of other couples with whom they feel a peculiar sort of spiritual link:

Wolverine and Rogue, somewhere in Canada

Thanks to J.K. Rowling for her universe. As you might be able to tell, we both like living in it very much.